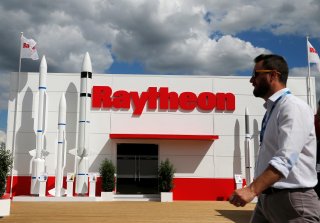 Advanced countermeasures, maneuverable re-entry vehicles, electronic-attack jamming and long-range cruise missiles are among the fast-evolving threats to the United States. The Army identified those threats in a published 2019 report titled Army Air and Missile Defense 2028. During the two years following that vision statement, this threat equation has become more significant and advanced.

The Army’s efforts to engineer a new generation of highly sensitive, long-range, paradigm-changing ground radar systems appear to be a response to these concerns. This Lower Tier Air and Missile Defense Sensor (LTAMDS), known as Ghost Eye by its maker Raytheon, is engineered with overlapping 120-degree arrays intended to seamlessly track approaching threats using a 360-degree protection envelope. After all, the Army Air and Missile Defense 2028 outlines the rationale and concepts of operation informing LTAMDS. It states that the system “will provide dramatically improved sensing capabilities and address complex integrated attacks. LTAMDS also maximizes the full kinematics of the Patriot missile set. As a state-of-the-art sensor, LTAMDS will mitigate the obsolescence challenges of the Patriot radar.”

So far, the Army is “on track with what Congress has directed” and is prepared “to deliver prototypes to the U.S. government by the end of 2023,” Maj. Gen. Brian Gibson the director of the Air and Missile Defense Cross-Functional Team for Army Futures Command told the National Interest.

A key advantage of the radar is its ability to update as threats such as cruise missiles maneuver and reposition in flight. This can make it difficult for a radar system to track a target. But the LTAMDS is engineered to operate with much greater sensitivity, improved range and ability to track smaller, faster-moving targets. LTAMDS uses three fixed 120-degree arrays designed to close “blind spots” or make it possible to maintain a track as an attacking missile shifts course in flight.

The speed and precision with which electromagnetic “pings” can bounce off of a target and generate a return signal that determines the fidelity, resolution or accuracy of the “rendering” of the threat emerging from the radar return. Therefore, precision ground-defense radar such as LTAMDS can generate the shape, size, distance and speed of an approaching threat. This technology was made possible by a semiconducting material known as gallium nitride (GaN). This compound increases the power efficiency of radar modules so that they can find, discriminate and track fast-approaching enemy targets. Raytheon was among the first companies to pioneer the use of GaN for military operations.

Thus, since radio frequency travels at the speed of light, a known entity, such as a missile, and its time of travel can be determined by a computer algorithm. The algorithm can then determine the exact distance of the missile or a myriad of other types of threats.