Raising A Sunken Submarine in the 1920s Was Dangerous Work 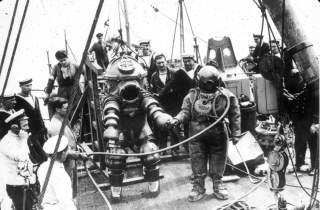 Key Point: By the standards of the time, the ship may as well have been on the moon — and reaching the vessel would take astronaut-level courage.

It was the night of Sept. 25, 1925 and much of the crew of the submarine USS S-51 slept in their bunks. The S-class submarine, now well into her third year of service, puttered along the surface near Rhode Island on a mission toward the Atlantic.

By the time the crews on both ships realized a collision was imminent, it was too late. The steamer smashed into S-51, ripping open a gash and violently flooding the ship — giving the crew seconds to escape. Only three men survived. Thirty-three sailors died.

Rear Adm. Edward Ellsberg, the author of On the Bottom: The Raising of the Submarine S-51 — now available as an ebook through Open Road Media — recalled how the sinking came during a flood of public criticism at the Navy Department.

Weeks earlier, a Navy commander in a seaplane attempting the first nonstop flight to Hawaii ran out of gas and went missing. (The pilot was eventually rescued.) Far worse, the Navy airship USS Shenandoah had recently crashed in Ohio, killing 14 crew members.

The sailing branch wanted — and the public demanded — S-51 and the bodies of her crew be pulled from the ocean. The Navy charged Ellsberg with leading the mission.

This procedure was unprecedented on the open ocean. S-51 rested 132 feet below the surface and Ellsberg’s team would spend months diving to her in 1920s-era equipment. By the standards of the time, the ship may as well have been on the moon — and reaching the vessel would take astronaut-level courage.

“Nothing that the ingenuity of man has permitted him to do is more unnatural than working as a diver in deep water,” Ellsberg wrote in On the Bottom, first published in 1929. “As a result of this, if a vessel sinks a few hundred feet beneath the surface of the sea, she becomes as inaccessible as if transported to a distant star.”

The plan called for repeated dives to S-51 and sealing off as many of her internal compartments as possible, and expelling the water to provide some buoyancy. Though some compartments were too badly damaged to be sealed.

Afterward, the crew — living for months in a small flotilla of tugboats and rescue and repair ships — would attach pontoons and raise her up. But the extreme danger of dive operations and difficult weather made the work tedious and demoralizing.

One crewman, James Frazer, came close to death when his lifeline became caught on a hook and cable being used to tear beams off the ship. The hook ripped loose and shot toward the surface, snagging Frazer’s lifeline and propelling him with it.

A rapid ascent without decompression can be fatal. As the surface crew members tried desperately to slow Frazer’s ascent, there was another emergency.

Frazer had been diving many years; visions of divers who had been “squeezed” before shot across his mind; the victims always had to be dug out of their helmets, — jelly.

Frazer felt himself start slowly down, then to his horror, his lifeline slipped free of the hook. No longer supported, his lines now all slack, weighted down with two hundred pounds of lead and copper, he started a swift plunge into the abyss. His suit clung to his body; he felt as if encased in a formfitting mold which was quickly shrinking on him; his ribs started to collapse. A little more pressure as he shot lower and it would be the end.

In this extremity, beyond all help from others, Frazer thought swiftly. One thing alone could save him, — compressed air. Plunging through the depths, death but a few seconds away, Frazer swung one hand to the control valve over his left breast. He gripped the valve handle, turned it wide open. Under high pressure a stream of air rushed through his helmet, ballooned out his suit. In spite of lead shoes and heavy diving rig, his distended suit was now buoyant. He stopped sinking, hung suspended in the water, then released a little air and floated gently down to the bottom of the sea. He landed in the midst of a school of fish, which swam around him excitedly. His head was dizzy, his chest felt weak, his ear drums ached, nearly burst from the rapid variations in pressure they had undergone.

Frazer looked around. Several feet away the hull of the S-51 loomed up, half buried in the ocean bottom. A few steps across the hard sand, and he leaned against her bilges while he pulled himself together.

The salvage team would eventually raise S-51 on July 5, 1926 and tow her to New York. But the most difficult task before that happened involved digging two tunnels underneath the submarine, where the sailors ran chains to grip the bottom of the vessel.

This required digging out the mud and clay on which the submarine sat, but picks and shovels were simply too exhausting and impractical given the bulky, awkward diving suits.

Instead, the sailors deployed high-pressure water hoses to chew away at the soil. This option posed its own set of dangers.

“I remembered in my boyhood days the sight of four firemen clinging to a hose nozzle, trying to direct the stream against a burning building,” Ellsberg wrote in On the Bottom.

One sailor “had tried the same thing except that his stream instead of meeting air, was discharged against solid water, making the reaction worse. The writhing hose had torn itself from his grasp and sent him flying backwards through the water.”

Lowering the water pressure slowed down progress, but kept the hoses under control. Then Ellsberg recalled a frightening near-death experience which happened to one tunneling sailor, Francis Smith.

Imagine his situation. In ice cold water, utter blackness, total solitude, he was buried one hundred and thirty-five feet below the surface of the sea. No sight, no sound, no sense of direction except the feel of the iron hull of the S-51 against his back, as he lay stretched out flat in a narrow hole, scarcely larger than his body, not big enough for him to turn around in. Ahead in his outstretched arms he grasped the nozzle, burrowing his way deeper, while around him coursed backward a black stream of freezing water laden with mud and clay.

Twenty minutes later, the tunnel — with Smith inside it — collapsed. Ellsberg was on the surface and knew something was wrong. Smith was trapped underneath a sunken submarine.

The fire hose leading over the rail was throbbing violently. Perhaps the nozzle had torn itself from Smith’s grasp, was thrashing him to death.

I took Smith’s phone … called down:

“Shall I turn off the water?”

Almost a scream came the answer:

“No! For God’s sake keep it going! The tunnel has caved in behind me!”

I felt faint. Hastily we coupled up another fire hose, slid it down the descending line for Eiben’s use. But it had taken two weeks to drive the tunnel to where Smith lay! On deck we looked at each other helplessly. Over the telephone, I could hear Smith’s labored breathing as he struggled in the darkness.

After a grueling period of time, Smith emerged from the tunnel.

Though he could not turn round, Smith had managed to pass the nozzle back between his legs, and guiding it with his feet, he had washed his way out backward through the cave-in!

Eiben left. Smith sat down on the ocean floor a few minutes to rest, then picked up his hose, crawled back into the tunnel and for half an hour more continued to wash his way towards the keel.

No deed ever performed in the heat of battle with the enemy where thousands cheer you on can compare with Francis Smith’s bravery, when in the silent depths of the ocean beneath the hulk of the S-51, he washed his way out of what well might have been his grave, then deliberately turned round, went back into the black hole from which he had by the grace of God escaped, and worked his way deeper and deeper into it.

That makes for a terrifying tale — and a reminder of the toughness of those who salvaged S-51. Also, the willingness to survive which exists in human beings when faced with almost certain death.

Read On the Bottom.

Image: J. Peress' 1-atm dive suit, Tritonia, explored the Lusitania wreck in 1935. Jim Jarrett was Peress's chief diver and made this dive to 312 feet. This suit was a precursor to the "Jim" suit, named for Jim Jarrett. National Atmospheric and Oceanic Administration via Wikimedia Commons.