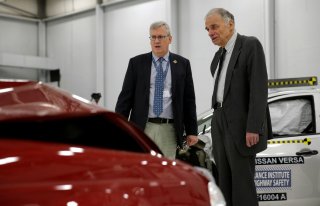 Earlier this week, while most of us were still trying to wrap our heads around the Fed’s emergency lending plans, consumer advocate Ralph Nader fired‐​off an irate letter to its Chair, Jay Powell.

Nader’s letter didn’t take issue with any of those plans. Instead, it accused Powell of having “stripped hundreds of billions of dollars of interest rate income from over 150 million savers in our country.” Returns on bank and money market accounts, Nader says, “are heading toward near zero because of the Fed’s actions.” And the Fed took those actions only because Powell “buckled under unprecedented pressure and haranguing from Donald Trump.”

I’m hardly one to suggest that the Fed can do no wrong, or that it ought to be spared from criticism, during an emergency or otherwise. But criticism can be just or unjust, and it’s hard to imagine anything more unjust than Mr. Nader’s criticism of Powell.

The least unjust of Nader’s claims is his assertion that savers are harmed by low interest rates. But even that assertion isn’t quite as true as Mr. Nader and many others suppose. As a 2017 Richmond Fed report explains,

savers are not just savers—they are also… consumers, and lower Fed policy rates generally mean lower loan rates for goods like homes and automobiles, as well as lower interest payments on variable rate loans. Finally, many savers also hold assets whose values tend to rise in low‐​interest‐​rate environments. Low rates tend to boost housing prices, for example, and housing comprises a large majority—nearly two-thirds—of assets for households in the middle of the wealth distribution. This is especially true of older households preparing for retirement; roughly 80 percent of households aged 65 and older own their homes, compared to roughly 64 percent for the nation as a whole, according to the Census Bureau.

Most savers are also workers, and it’s by ignoring that fact that Mr. Nader’s complaint reaches a higher plateau of injustice. The Fed’s dual mandate, as he presumably knows, charges it with avoiding unnecessary unemployment. And the surest way for the Fed to fail to meet that requirement is by keeping money too tight, that is, by setting overly‐​high rate targets. When people are unemployed, it is of little consolation to them to know that their dwindling savings accounts yield high returns.

Moreover, the longer‐​run effects of an excessively high Fed rate target include disinflation, if not deflation; and these effects end up reducing instead of raising nominal returns of bank deposits and money market funds.

Like all too many Fed critics, Mr. Nader misunderstands what he calls the Fed’s “extreme zero‐​interest rate policy.” The misunderstanding consists of the belief that the aim of ZIRP (to employ the popular acronym) is to suppress market interest rates, that is, to drive and keep them down artificially when they’d otherwise tend to rise. But while it’s true that market rates often respond to changes in the Fed’s rate settings, it’s no less often the case that the Fed responds to changes in the “natural” or “neutral” interest rate, meaning the rate consistent with stable prices or (and, I think, more accurately) the avoidance of cyclical unemployment.

That natural rates have been on the decline for some time now is one of the more notorious facts—if not the most notorious fact—the Fed has had to contend with over the course of the last dozen years. It’s owing to that decline, and not because it’s indifferent to the welfare of savers, that the Fed has had to resort twice now to ZIRP. Nor (as the FRED chart below makes clear) can there be any doubt that in each of these instances the Fed’s rate settings, far from leading market rates to zero, followed them there. Indeed, if the Fed is to be faulted, it’s for having delayed ZIRP too long, particularly in 2008.

So far, Mr. Nader’s unjust criticisms of Powell’s policies can be blamed on his ignorance of monetary economics. But that ignorance can’t explain, let alone excuse, Nader’s suggestion that Powell went along with the Fed’s recent rate cuts only because he was too weak‐​kneed to stand up to President Trump’s bullying.

Trump has, of course, long favored lower, if not zero, rates, and he has criticized Powell for not delivering them. Now Powell has delivered them. This much can be said in Nader’s favor. Alas, it’s hardly enough. The whole newspaper reading world knows that until recently Powell repeatedly disappointed Trump, while publicly insisting on the Fed’s independence. The merit of Nader’s charge therefore depends entirely on whether the Fed’s recent resort to ZIRP was motivated, not by the coronavirus crisis, but by Powell’s finally having caved‐​in to Trump’s badgering. Alas for Mr. Nader, the recently‐​released minutes for the Fed’s March 15th meeting leave no room for doubt concerning the reasoning behind the Fed’s decision. Had Mr. Nader waited just one more day, he might have read those minutes, and spared Mr. Powell his groundless and ill‐​timed philippic.

This article by George Selgin first appeared in CATO on April 4, 2020.