The Rampage Missile Might Be Israel's New Super Weapon 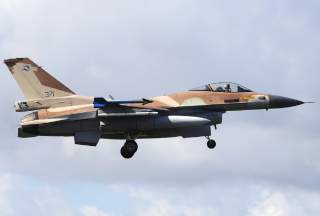 Israel reportedly used in combat for the first time a new kind of fast, long-range missile.

According to aviation journalist Babak Taghvaee, on April 13, 2019 Israeli air force warplanes fired, for the first time, at least one Rampage air-launched ballistic missile at a missile factory and weapons warehouses in Masyaf, Syria.

The Israelis chose to deploy Rampage “due to the danger of Syria Air Defense Force's S-300PM-2s,” Taghvaee tweeted. The S-300 surface-to-air missile, in theory, can intercept aircraft flying as far as 120 miles away.

The Israeli air raid succeeded in striking the target facilities and “destroying multiple artillery rockets and ballistic missile launchers,” according to Taghvaee. He tweeted commercial satellite imagery that appears to confirm damage to the site in Masyaf.

Rampage first broke cover in the summer of 2018. Israel Aerospace Industries and Israel Military Industry Systems announced they had tested, from an F-16, the 15-feet-long, 1,200-pound, GPS-guided Rampage — and had already inked a sale contract with one customer, presumably the Israeli air force.

With Rampage, the Israeli air force joined a slowly growing number of air arms developing ALBMs for non-nuclear attacks. Russia has introduced its own, much larger ALBM. China reportedly is working on one, too.

Among leading powers, only the United States apparently doesn’t see the value in an air-launched ballistic missile. America’s existing cruise missiles — which already are available to U.S. forces in very large numbers — are capable of striking, in large salvos, a wide range of distant targets.

“It can be detected, but it is very hard to intercept,” Amit Haimovich, director of marketing for IAI’s Malam engineering unit, told The Jerusalem Post.

The Israeli air force operates a wide range of conventional guided air-to-surface munitions. But none are supersonic. And it’s likely none can match Rampage’s range. “The whole point of this missile is that it can hit targets within standoff ranges,” Haimovich said.

While IAI didn’t specify the new weapon’s reach, a similar but larger Russian weapon reportedly can strike targets as far as 1,200 miles away. It’s reasonable to assume Rampage can travel hundreds of miles.

By the same token, it’s also reasonable to assume Rampage comes with a relatively small warhead. Israel’s Popeye cruise missile, which is roughly the same length as Rampage is, weighs 3,000 pounds — twice as much as Rampage does — and boasts a 750-pound warhead and a 50-mile range.

At half the weight of Popeye and likely devoting a greater proportion of its internal capacity to fuel, Rampage probably boasts a much smaller warhead than Popeye does. To be fair, Rampage’s high speed could lend it kinetic energy that partially compensates for the comparatively small warhead size.

But Rampage’s size means that an F-15 or F-16 probably wouldn’t carry more than two at a time. That limits the size of the missile salvos the Israeli air force could launch at some distant hard target — say, an airfield or chemical-weapons site.

This is a familiar problem for the first operator of ALBMs. In March 2018, Russian president Vladimir Putin introduced Kinzhal, an apparent air-launched version of the Iskander surface-launched rocket. China began testing its own ALBM in December 2016, according to press reports.

The Russian air force has modified six MiG-31 long-range fighters to carry the 25-feet-long Kinzhal, according to Taghvaee. The Kremlin will modify, before the end of 2018, as many as six more MiG-31s to carry the ALBM, Taghvaee claimed.

The squadron-size force of ALBM-armed MiGs gives Russia the ability to strike heavily-defended targets at long range. But not very many targets. “We’re talking about isolated launches — two or three or six missiles at a time,” said Pavel Podvig, an expert on the Russian military. The same limitations could apply to Israeli warplanes lobbing Rampages.

When it comes to long-range strikes, it clearly isn’t worth it to the U.S. military to trade warhead- and salvo-size for the protective benefit of speed, when it can simply launch lots of relatively slow weapons to compensate for their comparative vulnerability.

But for a country such as Israel with fewer launching platforms, a very fast and hard-to-intercept ballistic weapon — however modest its explosive power — might be just what it needs to hold at risk certain kinds of distant targets.