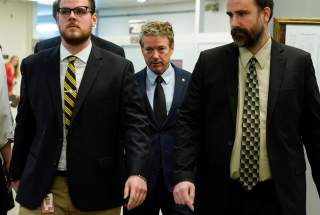 Paul spoke out in a series of tweets Friday morning, saying President Donald Trump “understands that the toppling of Saddam Hussein made Iran stronger” and that though Soleimani and Hussein were both evil men, “the question remains, whether his death will lead to more instability in the Middle East or less.”

His comments came after the Pentagon confirmed Thursday that President Donald Trump’s Defense Department ordered a U.S. military airstrike that killed Soleimani, the leader of Iran’s elite Quds Force. The airstrike also killed Abu Mahdi al-Muhandis, who is the leader of Kata’ib Hezbollah or the Popular Mobilization Forces (PMF), the group that attempted to storm the U.S. embassy in Baghdad on Dec. 31, 2019.

“The question today is whether the assassination of Soleimani will expand the war to endanger the lives of every American soldier or diplomat in the Middle East,” Paul wrote, before warning against war with Iran without congressional approval.

“If we are to go to war w/ Iran the Constitution dictates that we declare war. A war without a Congressional declaration is a recipe for feckless intermittent eruptions of violence w/ no clear mission for our soldiers.”

“Our young men and women in the armed services deserve better,” the Kentucky senator added.

Paul also referenced a quote from former United States Sen.Henry Clay, who, as Paul pointed out, lost his son in the Mexican American War of 1847.

“When Henry Clay lost his son in the Mexican American War in 1847, he spoke to a public gathering in Lexington, which included a young Congressman Abraham Lincoln in the crowd,” Paul tweeted. “Clay’s words still ring true: ‘A declaration of war is the highest and most awful exercise of sovereignty … such a vast and tremendous power ought not to be confided to the perilous exercise of one single man.’

Paul’s office did not respond to a request for comment from the Daily Caller News Foundation.