Rand Paul: Syria Withdrawal ‘May Be The Best Thing That Ever Happened To The Kurds’ 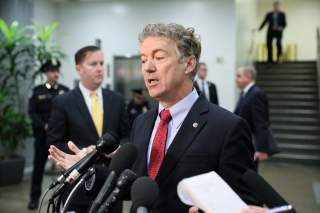 Republican Kentucky Sen. Rand Paul argued Wednesday that pulling the remaining U.S. troops from northern Syria “may be the best thing that ever happened to the Kurds.”

Paul’s comments came during a Wednesday interview on CNN’s “The Lead with Jake Tapper” as Vice President Mike Pence travels to Turkey to meet with Turkish President Recep Tayyip Erdogan to discuss a potential ceasefire to the country’s offensive against U.S.-allied Kurdish fighters.

“This was [President Donald Trump’s] decision. … It was the best thing not only for our troops, but it’s also the best way to adhere to the Constitution,” Paul said. “The Constitution says you don’t declare a war unless Congress votes on it, and who are we going to declare a war against — our ally, Turkey, the Free Syrian Army that used to be our ally, [Syrian President Bashar] Assad?”

Paul said Trump’s decision may end up being good for U.S.-allied Turkish fighters in the long run.

Paul also criticized South Carolina Republican Rep. Lindsey Graham’s stance on the issue. Graham, who often sides with the president, joined a number of other congressional Republicans in calling his decision “so sad” and “so dangerous” in a series of Oct. 7 tweets.

“Normally, the Lindsey Graham’s of this world would say Article Two gives the president the authority to do whatever he wants, and we don’t question the president because he has latitude. Now Lindsey Graham and [others] are up in arms on both sides of the aisle saying, ‘Oh, my goodness, President Trump moved 50 soldiers,'” the Kentucky senator said.

Paul appeared to be the lone congressperson who publicly agreed with the Trump administration’s decision immediately after it was announced by the White House.

“I stand with [Trump] today as he once again fulfills his promises to stop our endless wars and have a true America First foreign policy,” Paul wrote in an Oct. 7 tweet.