Range Warrior: This Is the Only Gun You Could Ever Need For Target Shoot 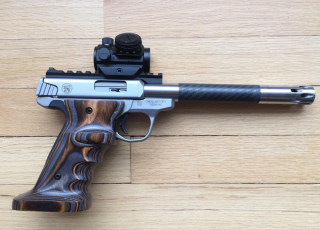 One of the most popular pistol types in America since the end of the Second World War is the small bore target pistol.

Used primarily by shooting clubs for competitions and individual target practices, the .22 LR semiautomatic pistol is an inexpensive means of participating in the shooting sports and often a gateway to larger caliber shooting. The Smith and Wesson Victory pistol is an accurate, inexpensive handgun for sportsmen and a handy weapon for outdoor use.

In the wake of World War II as small bore shooting became popular with veterans, shooting clubs, and schools, the semi-automatic .22 pistol became a must-have for American gun manufacturers. Typically featuring an all-metal body, thick bull barrel and adjustable sights, the .22 Long Rifle pistol could introduce new enthusiasts to shooting, win target competitions, and plink at tin cans sitting on a log during summer vacation. The semi-automatic target pistol became an essential part of American gun collections, along with hunting rifles and shotguns.

Today the small bore semi-automatic pistol is still a major part of the handgun market. These guns are typically cheaper than other, larger caliber semi-automatic pistols, with a feature set seemingly frozen in time: a sleek appearance, blowback operation, exposed barrel, and long, thin magazine capable of holding ten or more .22LR rounds.

The retirement of the Smith & Wesson Model 22A in 2015 briefly left a hole in the company’s lineup, one that was filled shortly afterward with the introduction of the new SW22 Victory. The Victory is a blowback pistol, meaning the pressure created by burning gunpowder not only drives the bullet forward out of the barrel at high speed it also drives back the slide, ejecting the round and then picking up a new bullet—and cocking the pistol—as the slide goes forward again. As the slide settles back into position, the weapon is again ready to fire with the pull of the trigger.

The blowback process is fairly violent, using all of the gunpowder gases created to cycle the pistol. This creates a fair amount of recoil, but the low pressure of the .22LR round means the pistol needs relatively little in terms of structure to safely operate. Small bore target pistols can, therefore, expend significant amounts of weight in the barrel, slide, and frame of the pistol to soak up recoil. This ensures less recoil and helps keep the gun on target during competitions. As a result, while newer, larger caliber pistol designs are now designed with polymer slides, target pistols are still largely all-metal guns.

For instance, the Smith & Wesson Victory is an all-metal gun, with barrel, slide, and frame all made with stainless steel. This results in a pistol that weighs thirty-six ounces unloaded—but the light weight of the .22LR round also means that loaded the pistol adds a negligible amount of weight. The pistol is 9.5 inches long, with a 5.5-inch bull barrel. The narrow cartridge ensures a narrow handgun, and the Victory is just 1.1 inches wide.

The Victory, like many target handguns, has fixed fiber optic sights in the front and adjustable sights in the rear that self-illuminate, providing three bright aiming dots visible both in the sunny outdoors and in darker indoor shooting lanes. A single action pistol, the Victory has a lighter trigger pull than double action service pistols and the five pound, two-ounce trigger pull makes for steadier aiming during competitive shooting.

Smith & Wesson’s new take on the small bore target pistol has a ten round magazine, allowing the shooter to shoot a slow fire competition round of ten shots in ten minutes without lowering the pistol to reload. The Victory also features a manual safety which is often necessary not only for general safety but to satisfy shooting competition rules. Finally, the Victory has polymer grips for weight savings while maintaining a positive grip on the handgun.

Small bore pistols and their competitions are some of the most popular guns and events in the shooting sports. The Smith & Wesson Victory is an excellent choice for shooters new to the sport or looking for a new pistol to take to matches.