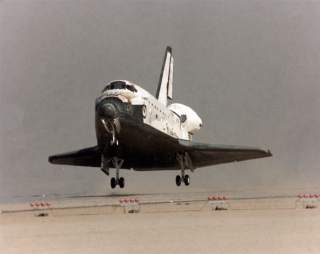 The orbiter Challenger became the workhorse of the space fleet, completing 87 earth orbits and logging more than 69 cumulative days in space.

Taken on May 6, 1985, the interesting picture in this post shows Space Shuttle Challenger landing on lakebed runway 17L at Edwards Air Force Base (AFB).

According to NASA, Shuttle orbiter Challenger (OV-099) joined NASA’s fleet of reusable winged spaceships in Jul. 1982. It flew nine successful Space Shuttle missions until Jan. 28, 1986 when the Challenger and its seven-member crew were lost 73 seconds after launch when a booster failure resulted in breakup of the vehicle.

Challenger started out as a high-fidelity structural test article (STA-099). Then it was modified at Rockwell International’s Palmdale, Calif., plant under a contract that called for Challenger’s conversion from test vehicle to full operational status. Spaceship Challenger was rolled out of the Palmdale facility on June 30, 1982.

Ferried to the Kennedy Space Center, the vehicle became the second orbiter in the Shuttle fleet. On Apr. 4, 1983, Challenger blasted off from Complex 39’s Pad A on its maiden space voyage. On this flight, the sixth of the Space Shuttle program, Challenger and its crew carried the first Tracking and Data Relay satellite. Challenger’s missions also included: the first night launch and landing of the Shuttle program (STS-8), the first landing of the Shuttle at Kennedy Space Center (41-B), and the first in-orbit satellite capture and repair operation (41-C). The ship also was used for three Spacelab missions.

Other firsts were achieved with Challenger: the first spacewalk of the Shuttle program (STS-6), the first American woman in space (STS-7), the first flight of an African American (STS-8), and the first untethered spacewalks using the Manned Maneuvering Units (41-B).

The orbiter Challenger became the workhorse of the space fleet, completing 87 earth orbits and logging more than 69 cumulative days in space. A wide variety of commercial and scientific payloads was deployed from its payload bay.

Challenger was named after an American Naval research vessel that sailed the Atlantic and Pacific oceans during the 1870s. The Apollo 17 lunar module also carried the name of Challenger.

Following the 51-L accident, a seven month ocean salvage operation located and recovered approximately 45 percent of the orbiter. After analysis, the remnants were transported to an abandoned Minuteman missile complex on Cape Canaveral Air Force Station in Jan. 1987. There, in two silos and adjacent rooms, they will remain in longterm storage.