Razor HD Gen III LPVO: The 'Optics' the U.S. Military Passed on Can Now Be Yours 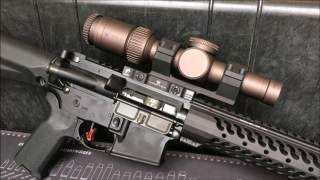 The Razor HD line from Vortex Optics are some of the best low-power variable optics (LPVOs) on the market. But in January 2020, Vortex announced the third generation of the Razor HD line, which includes a 1-10x magnification LPVO, one of the highest magnifications that has been achieved on a scope with a true 1x low-end setting. This sets it up to beat the competition in flexibility, and the optic is anticipated to be extremely popular, with a lot of Razor HD Gen II owners selling their scopes to raise cash for the new generation.

But why are Razor HD LPVOs so popular? Why is 1-10x a particularly big deal?

Razor HD LPVOs are very popular because they have all the qualities a modern LPVO should possess. The glass is clear, the illumination of the reticle is bright, and the eyebox is large. The bright illumination of the reticle and the large eyebox allows for the reticle to be quickly picked up when using the scope as a close combat optic on 1x, for that reason the Razor HD is popular with 3-gun competitors. But this all comes at a cost, as the Razor HD line is Vortex’s “premium” line, with the most engineering work and best glass going into them. The cheaper medium-grade Viper PST II and budget Strike Eagle lines, while acceptable, have worse optical clarity and brightness compared to the Razors.

1-10x magnification is a big deal because it is the first time a major scope manufacturer has made a quality LPVO with that range of magnification. While the smaller, mid-range optics manufacturer Atibal made a 1-10x LPVO in their Atibal X LPVO in October 2019, the quality of glass, illumination, and eyebox are probably not on the same level as the Razor HD Gen III 1-10x, as Atibal’s earlier 1-8x and 1-6x scopes were not on the level of the Razor HD Gen II. The extra magnification pushes LPVOs into where sniper rifle scopes were around 30 years ago, allowing for better observational capabilities and the ability to engage at range. The move to the higher magnification is possible due to an increase in tube diameter, both the Atibal X and the Razor HD Gen III 1-10x use 34mm tubes, compared to the 30mm tubes of the earlier Gen II 1-6x.

The military has been interested in LPVOs for a while now, and the Razor HD Gen II 1-6x competed for a US Special Operations Command (USSOCOM) optics contract in 2018, but it lost to Sig’s Tango6 1-6x LPVO. The Tango6 was also adopted for the US Army’s Squad Designated Marksman Rifle (SDM-R).

But with the additional capability that the Razor HD Gen III brings, it’s likely that some units will be picking up the scope in small quantities. Special Operations Forces units were known to use Razor LPVOs before, though usually they were purchased in small numbers in a unit or by the individual.

The ability for an optics company to make a true 1-10x scope is a testament to how far optics technology has come in the last few decades with iterative improvements. In the 1990s, a variable scope was usually considered to be 3-9x, and LPVOs were forced to go to 1.1x if they wanted to go past 4 or 6x on the high end. Nowadays, 1-6x LPVOs are starting to look underpowered, as 8x is becoming the new standard and companies like Razor are pushing to 10x.