The Real Coronavirus Crisis: Could Netflix Run Out of Content? 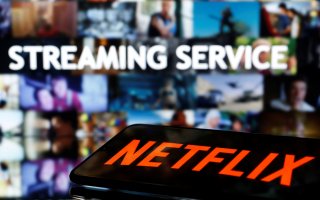 Considering the massive amount of content that's currently housed on Netflix, one would think it impossible for them ever run out. And while watching every single thing on the service that they want to watch is likely out of the question for any particular Netflix subscriber, the streamer's business model depends on new stuff arriving just about every day.

Whether it's TV seasons, movies, standup specials or documentaries, Netflix has always been able to deliver massive amounts of new material on a near-daily basis. But despite getting huge numbers of viewership and new subscriptions during the coronavirus quarantines, Netflix could eventually face a disruption in the arrival of new shows.

In an interview on CNN this week, Ted Sarandos, Netflix's chief content officer, said he’s not concerned about that possibility, at least not yet.

While acknowledging that the company has had to shut down its productions around the world, Sarandos told CNN's Brian Stelter that the company isn't worried about running out of new things.

"We work pretty far ahead, and we deliver all of our shows with all episodes at once, so we're pretty far ahead," Sarandos said in the interview. "So we don't see any disruption in our output over the next few months. Maybe later in the year, if this progresses long, you'll start feeling some of that, as the physical production is not operating." He added that despite the production shutdowns, creative process has continued unabated, with the cast and crew of the animated series Big Mouth recently holding a "virtual table read."

Sarandos also said that Netflix, along with other major tech companies, has complied with European Union requests to reduce video quality in Europe and would comply with similar asks from other governments. Netflix has not announced plans to perform similar reductions in the United States, although YouTube has.

CNN’s interview with Sarandos was conducted over Cisco Webex.

Back on January 3, Netflix tweeted out a long list of the original movies that it plans to debut in 2020. It included dozens of films, including Mank, the newest movie from David Fincher, Ron Howard's adaptation of the bestselling book Hillbilly Elegy, Ryan Murphy's adaptation of the play The Boys in the Band, and many more. Some on the list, such as the Taylor Swift documentary Miss Americana, have already debuted.

In recent years Netflix has competed strongly for Oscars with prestigious movies at the end of the year, so whether this year's planned awards slate is completed on time will represent a big test for the company.