The Real Lessons of Trinity and Hiroshima 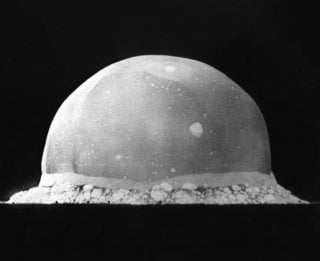 Most Americans are only familiar with a symbolic history of the atomic bomb, one that can lead people “to be very supportive of policies that have been bad for the country,” argued nuclear historian Dr. Alex Wellerstein in an interview with the Ploughshares Fund podcast Press The Button.

“It’s not totally different from the conversations people are having about Confederate monuments and Columbus,” he explained. “There’s all these things that people have misunderstood, but they hold onto them because it’s a familiar narrative that tells us who we are. And the fact that it’s wrong makes it really hard to dislodge.”

Making that effort now is an even more important task as the nation approaches the 75th anniversary of the atomic bombings of Hiroshima and Nagasaki in August, as well as the Trinity test later this week.

Trinity, the world’s first nuclear explosion on July 16, 1945, is often portrayed as “this sort of technical accomplishment,” a triumphant—and perhaps inevitable—the culmination of years of frenetic effort from scientists like Robert Oppenheimer and Enrico Fermi, said Wellerstein.

“In its actual context, it’s a bit more desperate than that,” he explained. Despite the Manhattan Project’s price tag of $2 billion—nearly $30 billion in today’s dollars—the lead scientists were not sure if the implosion design they were testing was actually going to work. And when it did, the reaction wasn’t wholly triumphant. “There are many accounts of scientists who were ecstatic about the Trinity test results and then had this come down,” said Wellerstein. “They realized, ‘Oh God, what is this thing going to do if you put it on people?’”

This mismatch between rosy narratives and complicated reality is even more apparent in conversations around the atomic bombings of Hiroshima and Nagasaki, argued Wellerstein. This is just as true of the smaller stories we tell, such as the belief that Japan was warned about the atomic bomb. (“This misunderstands the whole atomic bombing operation, which was meant to be a surprise,” Wellerstein explained, pointing out that warning leaflets were dropped on Nagasaki only after that city had been bombed, too.) This mismatch between reality and preferred narratives is also true of as it is of the larger, more salient myths.

Two significant examples of this latter type are the belief that the only options available to American military planners were to use the atomic bombs or commit to a bloody invasion of Japan, and its natural corollary—that the atomic bombs themselves ended World War II.

Wellerstein considers the former argument to be a “very clever rhetorical trap.” Though an invasion would undoubtedly have been horrific, because it didn’t happen, bombing proponents can inflate casualty numbers to whatever level they want, making it “basically impossible not to conclude that the atomic bombs are the better choice.”

It’s also ahistorical. Far from being an either-or situation, “the plan was to bomb and invade and to have the Soviets invade and to blockade,” he wrote. “It was an ‘everything and the kitchen sink’ approach to ending the war with Japan.” In other words, the atomic bombings didn’t stop the invasion from occurring—the Japanese surrender did.

But it’s not clear what the exact relationship was between those two events. “It’s a lot more complicated than ‘bombs went off, war ended,” Wellerstein explained. The Hiroshima bombing and the Soviet declaration of war occurred on the same day, making it almost impossible to disentangle the individual impact each had on the Japanese high command. The rapid bombing of Nagasaki just three days later further complicates the issue, as does the fact that Japan was already “on its last ropes” by August 1945.

“What if we just waited until after the Soviet invasion?” he asked. “Or we could have used one bomb and waited. Or we could have used the bomb on a basically uninhabited area,” like an offshore island. “If you start offering up these possibilities, you can argue about which one of them sounds more plausible, but you’re not locked in” to the standard narrative.

In any event, the mere fact that there is so much confusion over what ended the war “is important to emphasize to non-historians because it’s often presented as a cut and dry thing,” said Wellerstein. “That has a lot of implications for how you think about other wars.”

“For example, World War Two is the only war that anybody has claimed was ended by aerial bombing. And even that’s not clear that the aerial bombing ended the war,” he explained. “And yet Americans are very keen to believe that if we just bomb the heck out of a country, they’ll give us what we want.”

“In the history of warfare, that’s basically never happened,” Wellerstein concluded. “If it did, the atomic bombings would be the only time, and it’s not clear it is what happened there.”

The entire interview with Dr. Alex Wellerstein is available here on Press The Button.