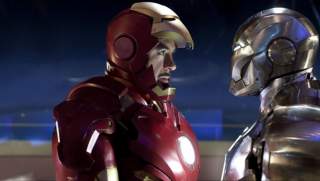 With America and Russia developing exoskeletons—essentially the powered armor suits depicted in  science fiction and superhero films like Starship Troopers and Iron Man—it was inevitable that China would follow suit.

“As we all know, reloading artillery is tiring work,” said an article on Chinese social media platform WeChat. “This is especially true for large-caliber howitzers, whose shells often weigh tens of kilograms, and repeated movement of reloading artillery is exhausting, and many people suffer from deteriorative back problems starting at a young age, impacting the effectiveness of artillery operations.”

The WeChat article extolled the virtues of military exoskeletons. “In combat situations such as operations behind enemy lines, mountain warfare, on border patrols, or rescue and disaster relief, mobile platforms generally cannot reach mission areas or their fuel supplies are insufficient to operate for very long. Exoskeletons could enhance mobility while carrying heavy loads or adaptability to complex terrain while reducing the physical fatigue of long-term marching.”

Particularly interesting is the article’s assertion that China can’t and won’t fall behind other nations in developing military exoskeletons. “Many people believe exoskeletons remain in the realm of science fiction, but this view has been disproved, and with the advance of technology, the exoskeleton has become practical. Russia has released videos of soldiers on the Syrian battlefield employing K-2 exoskeletons for mine clearance operations, and several U.S. exoskeleton systems have been put into use on the battlefield in the Middle East.

“China, of course, is not backward,” the article warned. “And this ‘Super-Power Warrior – 2019’ competition demonstrates that China’s exoskeleton systems have also gradually moved towards practicality.”

The U.S. Army’s Foreign Military Studies Office noted indications on Chinese Web forums that the state-owned arms maker Norinco has an exoskeleton program for civilian use. “Norinco’s Northwest Institute of Electrical and Mechanical Engineering (202 Research Institute), established an exoskeleton research program in April 2013,” FMSO said. “The research institute apparently completed the digital design, modeling and physical prototyping of the exoskeleton in two years and it entered environmental testing in 2015. A number of civilian universities appear to be involved related work with civilian applications. Walking assistance exoskeletons for the elderly in particular seems to be an area of interest, due to China’s ballooning elderly population.”

Unfortunately, China may discover that Iron Man suits work better on film than they do in reality, where hurdles such as ensuring sufficient battery power limit the utility of current exoskeleton designs. The U.S. Special Operations Command generated much buzz in 2013 when it announced its tactical assault light operator suit (TALOS) exoskeleton, which included armor protection and sensors as well as enhanced strength and endurance for its operator. But in 2019, SOCOM admitted that while a TALOS prototype had been built, the project had fallen short of its goals.

The original goal had been to “based on an operator going through a door in a hostage rescue and being shot in a place where his body armor plate could not save him—was, ‘can we increase the survivability of the first person going through a door when they know they are going to be facing a funnel fire?’” a USSOCOM official said at a 2019 conference.

“It's not ready for prime time in a close-combat environment,” he conceded. For the time being, it seems unlikely that China will enjoy any better success.