Is This the Real Russia-China Alliance America Should Fear? 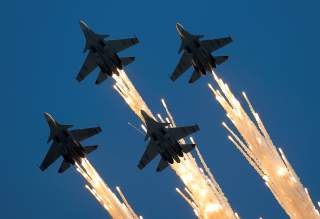 Against the backdrop of a decade-long NATO-Russia military buildup, another front of global competition is emerging: Russia is pursuing a slow but steady effort to establish its own global navigation system, GLONASS, to rival and potentially even dethrone GPS.

GLONASS, or the “Global Navigation Satellite System,” was born as a 1970’s Soviet project to compete with America’s GPS system in the Cold War space race. It fell far behind its U.S. counterpart due to a lack of funding over the 1990s, but was revived by the Kremlin with its 2003 successor GLONASS-M. These efforts were followed up in 2015 with the most recent GLONASS-K, and the entirely domestically-produced K2 version slated for release by 2022.

The National Interest previously reported on Russian efforts to establish GLONASS in the Arctic. Concurrently with its Arctic operations, Russia has been quietly pursuing a satellite navigation partnership with China.

In 2015, Russia and China signed a joint GLONASS-BeiDou cooperation and compatibility agreement. BeiDou is China’s satellite navigation system, entering its third iteration in 2015 and scheduled for global coverage in 2020.

As then-General Director of Roscosmos Igor Komarov put it,

“we have made strides in cooperation concerning remote sensing, in harmonization and synchronization of GLONASS and BeiDou. The agreements have all been signed, and the work continues. There are prospects, and great deal of mutual interest on the part of the signatories in several files: engines, mutual development of delivery vehicles, manned space missions, and experiments in low orbit.“

The 2015 agreement seems to have been more of a statement of intent, but it was followed in 2017 by the more concrete “Silk Road” project. Silk Road was a joint Chinese-Russian program, among other things, for the “assessment of the GLONASS and BeiDou navigation and interference environment.” It marked the first, large-scale Sino-Russian effort to share, compare and systematize satellite data.

The gains from Silk Road were consolidated into an October 2018 agreement to use the same “chipset system” for GLONASS and BeiDou satellites. This gives users access to the sum total of GLONASS-BeiDou zone coverage, which spans across 40 functioning satellites at the time of writing and “encompasses the earth’s entire surface” according to GLONASS President Alexander Gurko.

However, it is important to note that this agreement does not entail a much-vaunted GLONASS-BeiDou merger. To the contrary, it suggests that Russia’s long-term strategy is to share data with Chinese satellites and to cooperate with the Chinese on space navigation research while keeping GLONASS as an exclusively Russian enterprise. This allows Russia to expand GLONASS’ reach and recoup some R&D costs without the sticky security, logistical and diplomatic concerns stemming from a formal Russian-Chinese navigation satellite merger.

This approach was further cemented in a November 2018 agreement for the development of GLONASS and BeiDou for “peaceful” purposes, announced in a joint statement by Russian prime minister Dmitry Medvedev and Chinese premier Li Keqiang. The agreement also stressed cooperation in sharing data to better track and manage commercial flows between the Sino-Russian border.

Over the span of three years, the Kremlin built an institutional framework for a tight-knit satellite navigation partnership with China from the ground up. The rate at which Russia and China are coordinating vital infrastructure efforts should alarm western observers in a global context of ongoing political alignment between Moscow and Beijing.