Real-Time Information Will Drive the Robot Wars of the Future 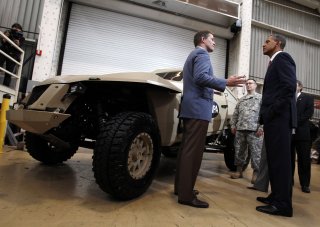 The Army is trying to build artificial intelligence into its new generation of Robotic Combat Vehicles. This will allow them to process data, organize incoming sensor information from otherwise disparate pools of information, and distribute targeting information in real-time. Now, the Army is moving forward quickly with its ten-ton Robotic Combat Vehicle-Medium, which is expected to reshape modern Combined Arms Maneuver.

Artificial intelligence-enabled computer systems can bounce incoming sensor data off of an existing database to draw comparisons, solve problems and analyze various variables that are tied to one another. It then provides that information to military officials so that they can make appropriate decisions. Advanced algorithms can sift through data to find key moments or objects of great combat relevance in milliseconds, easing the cognitive burden and time constraints placed on human decisionmakers.

“We are looking at using unmanned vehicles to expand the network and expand the line-of-sight so we can push these robots out as far as possible so soldiers do not have to do that,” Maj. Gen. Ross Coffman, the director of the Next Generation Combat Vehicle Cross-Functional Team for Army Futures Command, told reporters at the 2021 Association of the United States Army Annual Convention.

Although much progress continues to be made in the realm of cross-force, cross-domain information sharing, transmitting data across otherwise disconnected areas remains challenging for Army developers.

“I still think one of the greatest challenges we are going to have is the network,” Coffman said. “We are trying to pass full-motion video in real-time.”

Coffman further explained that video and data transmission can be challenged by line-of-sight impediments or other obstacles likely to complicate information sharing.

The Army has identified the growing technological synergy as “warfighter machine interface,” which means that machines can leverage procedural speed to distill, organize, analyze and then transmit crucial data of great significance to human decisionmakers pressed to make fast decisions under enemy fire.

Many of the Army’s industry partners, such as General Dynamics Land Systems, are building into their robot prototypes artificial intelligence and networking technology. The company unveiled its TRX series of robot prototypes, a new ten-ton configurable tracked robotic platform engineered for a range of different hardware configurations and mission sets at AUSA 2021.

“We took sensor packages and integrated them onto the robot. made it architecturally capable of incorporating a variety of mission packages and data processing capability to allow input from sensors to be redistributed as necessary,” Don Kotchman, the vice president of GDLS told the National Interest.