The Real Tragedy of Israel’s Wars in Gaza 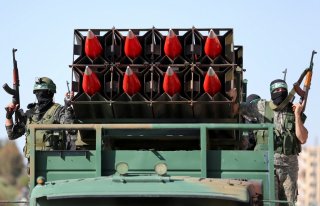 Operation Guardian of the Walls—the fourth war between Israel and Hamas, Palestinian Islamic Jihad, and other groups in Gaza—may be over, but the controversy over the war is only just beginning. Multiple news outlets already allege that the Israeli forces committed war crimes during the conflict. Several American lawmakers criticized Israel’s “attack on Palestinian families.” Senator Bernie Sanders (I-VT) even introduced a failed resolution disapproving of a $735 million American arms sale to Israel. A variety of states—including China and Russia—condemned the civilian death toll, despite their own dubious human rights records. Celebrities too have entered the fray. Stepping back for a moment, it is worth asking: Did Israel have another viable operational option vis-à-vis Gaza and could another advanced military have done any better under the same circumstances? The answer is probably not.

To start, some pundits suggested that Israel simply could have hunkered down, let its Iron Dome air defense system intercept incoming Hamas’ missiles, and wait for international pressure to stop Hamas’ bombardment. Such passivity, though, was likely a nonstarter. Hamas and its allies have an arsenal of upwards of 30,000 rockets and mortars and Iron Dome is at best only 90 percent effective—meaning that hundreds of Hamas’ rockets still struck their targets. Moreover, given that Iron Dome’s interceptors cost an estimated $40,000 or more each, Israel does not have an unlimited supply either. Above all, the international community may not have the will or leverage to stop Hamas and its fellow Palestinian groups, absent Israeli military pressure.

Unsurprisingly, few, if any, states have turned the other cheek when faced with similar situations. For example, the United States bombed Libya in response to an attack on a club visited by American servicemembers in West Germany in the 1980s. It struck Afghanistan and Sudan in response to American embassy bombings in the 1990s. And the United States launched a decades-long global war on terrorism after the 9/11 attacks. For better or worse, time and again, domestic politics—if not strategic need—push states to go on the offensive when their citizenry is attacked.

Secondly, an only moderately more kinetic approach might have involved the use of enough force to make a point, but not enough to inflict serious damage. Indeed, the United States tried this small-scale use of airpower repeatedly over the last three decades to accomplish a variety of ends from penalizing Saddam Hussein for interfering with Iraq’s weapons inspections to punishing the Bashar al-Assad regime using chemical weapons in Syria. Unfortunately, this diplomacy-by-cruise-missile has rarely achieved its objectives and just as often backfires. Deterrence, as Thomas Schelling put it, revolves around the “power to hurt” and that requires demonstrating both the capability as well as the will to act.

Nor is it clear whether a more limited strike would have preserved Israel’s global reputation either. Despite all the punditry, Guardian of the Walls may not have changed support for Israel as much as some have asserted. In annual Gallup polling, the percentage of Americans siding “more with the Israelis” in the conflict since 2019 remains almost constant at between 58 to 60 percent, while support for the Palestinians ticked upward slightly from 21 percent in 2019 to 25 percent in 2021 before this last round of fighting. While there has not been much polling on the topic over the last month, initial indications suggest that Guardian of the Walls did not actually change American perceptions of Israel dramatically. A Fox News poll taken between May 22-25, 2021, produced an almost identical result as Gallup, with 59 percent of Americans backing Israel in the most recent conflict and 24 percent backing the Palestinians.

Moreover, public opinion is shaped by multiple factors, rather than a strict correlation between bombs to polling percentage points. Consequently, even if Israel opted for a more restrained use of force, the visuals of conflicts—advanced Israeli aircraft bombing destroying Palestinian buildings—would have remained the same. Furthermore, support for Israel among the American political Left has been sliding for years for reasons that extend well beyond the Israeli military’s wartime conduct. While this most recent Gaza war certainly did not help reverse this trend, it did not cause it either and it is hard to imagine Israel making many inroads in the American Left, absent a broader shift in its treatment of the Palestinians during peacetime.

Finally, even if Israel decided on a more limited strike initially, whether the conflict stayed limited depended at least as much on Hamas’ actions as it did on Israel’s. As discussed earlier, if Hamas’ rocket barrages continued after Israel’s initial response, then Israel likely would have to respond. And Hamas’ leadership would have had its own reasons to continue the conflict. The conflict, arguably, solidified Hamas’ status as the primary advocate for the Palestinians at the expense of its rivals in the Palestinian Authority and brought international attention to its cause.

On the opposite end of the spectrum, Israel could have opted for a ground campaign. In some sense, such a conflict would have been “fairer.” Hamas and its allies would have enjoyed the benefits of fighting on their own turf. The walls, smoke, and general chaos of urban combat would have blunted some of Israel’s technological edge. The death count likely also would have been less lopsided. As opposed to the dozen Israelis killed during Guardian of the Walls, during Operation Protective Edge in 2014—the last major Gaza War—some sixty-six Israeli soldiers died mostly during ground operations, in addition to at least half a dozen Israeli civilians.

Symmetric, however, does not mean more precise. While the cost in Israeli lives would have increased, so too would the likely death toll on Palestinians. Depending on the estimate, somewhere between roughly 1,600 to 2,100 Palestinians—including many civilians—died during Protective Edge. Much of those are due to the fundamentally bloody nature of ground combat. When the United States fought ground wars in dense Iraqi urban centers like Sadr City or Fallujah with irregular forces fighting in and around civilians, combat extracted a similarly grim toll.

And so, Israel opted for a fourth option in the end—a large-scale, but air-centric campaign. Air wars against irregular forces entrenched in cities, however, prove to be an only somewhat cleaner and no less difficult military option than ground campaigns. This is especially true in Gaza where about 2 million residents are packed into 360 square kilometers. Israel needed to hit Hamas targets that were next to, above, or increasingly, below civilian areas—all from tens of thousands of feet in the air. The two sides dispute the number of civilian casualties but both place the death toll in the hundreds—in some ways a mercifully low figure given that Israel struck some 1,500 targets many in the middle of a densely populated city and some 680 Hamas rockets misfired and landed in Gaza. While the international community can scrutinize any individual targeting choice, the sad truth is that for the most part, the operation pushed up against technological feasibility.

And again, Israel’s situation was not unique. The United States also has repeatedly struggled to wage wars while minimizing civilian casualties and also has found that precision airpower is not a panacea. Most recently, the American-led air war against the Islamic State struggled with similar operational challenges when rooting out the Islamic State from cities in Mosul, Iraq, or Raqqa, Syria.

Ultimately, all the intense public criticism of Israel’s wars in Gaza misses the point. Israel’s wars in Gaza are bloody, destructive, and inconclusive. That said, they are also largely executed with the care and degree of precision that could be expected of a sophisticated military operating in extraordinarily difficult terrain. Had another military faced a similar task, some of the individual targeting choices may have changed, but the overall outcome would not.

What deserves more international scrutiny is less the wars themselves, but rather everything that comes before and after these conflicts. Israel’s ongoing blockade of Gaza—ostensibly to limit military supplies to groups like Hamas—inflicts a massive humanitarian toll on Gaza’s civilian inhabitants—and all but ensures that another war is inevitable. And this is, perhaps, what sets Israel’s wars in Gaza apart from any recent American war or conflict involving a developed nation. In the latter cases, be it Iraq, Afghanistan, and elsewhere, there is at least some attempt—albeit not always a successful one—to win the peace and offer civilian populations hope for something better. In Israel’s case, its strategy of “mowing the grass” in Gaza offers no alternative to continued bloodshed. And that is the real tragedy of Israel’s wars in Gaza.

A former active-duty Army officer and Iraq war veteran, Raphael S. Cohen is the acting director of the strategy and doctrine program of Project Air Force at the nonpartisan, nonprofit RAND Corporation and the lead author of From Cast Lead to Protective Edge: Lessons from Israel's Wars in Gaza.