The Real Trump Impeachment Battle Is About to Begin 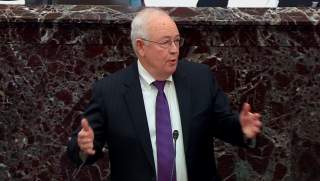 President Trump’s impeachment defense team will finish presenting their case today. After that comes a period of up to 16 hours for senators to “question the parties.” Then it’s time to rumble.

Don’t think that this question period will be something like the British Parliament’s raucous “Prime Minister’s Questions.” Under impeachment trial rules adopted in 1986, senators put their questions in writing; those questions are then asked by the presiding officer.

The fireworks won’t start until the senators start debating—most likely on Friday—whether to issue subpoenas to require witness testimony or documents.

Democrats want you to believe that Senate votes on this issue will determine whether any witnesses or documents will be part of the trial. This spin, they think, will bolster their plan to cry “cover-up” when the Senate acquits Trump. But the entire House record, more than 25,000 pages worth, was entered into evidence at the start of the trial. The House managers and the president’s defense team just spent six days presenting their cases, which included endless clips of witnesses who had testified before the House.

Instead, the Senate will decide whether additional witnesses or documents are needed for its deliberation and decision whether to convict Trump of the House’s articles of impeachment. As to witnesses, Democrats focus on four individuals—all Trump administration officials at the time, who did not testify before the House.

The House has already demonstrated that these witnesses are not necessary to their impeachment case. The House issued subpoenas to these individuals but, when the White House prevented their testimony, the lower chamber did not seek to enforce the subpoenas in court. If the House was serious about securing this testimony, you would have expected it to go to the courts. Not only did it not do so, In one instance, it actually withdrew a subpoena rather than find out from a judge whether it should be honored.

Instead of determining whether the Trump administration’s refusal to allow these witnesses to testify was valid, the House took their marbles, went home, and turned the whole thing into another article of impeachment. It’s almost as if House Democrats were only trying to goad the administration into a position that any administration would take so that they could claim “obstruction of Congress.” Almost.

Under Senate Resolution 483, adopted when the trial began, the Senate will address the issue of additional witnesses and documents in three steps. First, after four hours of debate, it will vote on whether “it shall be in order to consider and debate…any motion to subpoena witnesses or documents.” In other words, this first vote will be whether to even consider seeking additional witnesses or documents. If this first motion fails, there’s little else to do but deliberate.

If the motion passes, the Senate’s next decision will be whether to issue subpoenas for particular witnesses or documents. During the impeachment trial of President Bill Clinton, the vote on calling additional witnesses was 56-44, with all but one Democrat in opposition.

Subpoenas, however, do not necessarily mean testimony. There’s no reason to believe that the Trump administration will be less likely to resist testimony in the Senate than in the House. And even if the courts upheld Senate subpoenas, Senate rules state that the witnesses’ testimony will not be admissible “unless the parties have had an opportunity to depose such witnesses.” Only then will the Senate take the third step of deciding, after subpoenas and depositions, whether witnesses will actually testify. In the Clinton trial, the Senate voted 70-30 to accept excerpts from videotaped depositions in lieu of live witness testimony.

Should the Senate decide that additional witnesses or documents are unnecessary, senators will still have a truckload of material available for their final deliberation. This includes the entire House record; the House’s 107-page trial brief and statement of material facts; Trump’s 110-page trial memorandum; 45 pages of opinions from the Department of Justice’s Office of Legal Counsel; nearly 40 hours of presentation by the House managers and Trump’s team; and the answers of both parties to senators’ questions.

This is not a complicated impeachment case. The House impeached Trump not for his interactions with Ukraine, but for what the House claimed was his “corrupt motive.” Either there’s actual evidence for that or there isn’t. The House also impeached Trump for what it calls “obstruction of Congress.” One branch’s obstruction is another branch’s defense of its own interests.

Ironically, senators should consider whether House Democrats might be the ones guilty of a “corrupt motive.” Attempting to remove an incumbent president during his first term, after all, is about as dramatic an interference in the next election as our system of government allows. Democrats claim that a mere phone call is enough for Trump to be guilty of trying to “cheat” in the 2020 election. Senators should not allow them to do the same by weaponizing impeachment.

A senior legal fellow at The Heritage Foundation, Thomas Jipping is deputy director of the think tank’s Meese Center for Legal and Judicial Studies.