The Reality of Armed, Commercial Drones 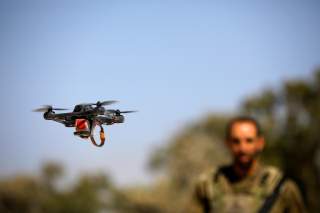 Motivated by the threat of terrorist drones, the House recently approved the “Preventing Emerging Threats Act of 2018” and the Senate is expected to follow suit. The bill allows Homeland Security and the Justice Department to detect, track, and even destroy an unmanned aircraft. This law comes on the heels of the drone-based assassination attempt against Venezuelan President Nicolas Maduro. By refashioning a surveillance drone to include munition capability, this attack highlights the ability of state and non-state actors to repurpose commercial drones into a DIY armed drone. As a result, security forces both inside and outside of the military must be prepared for this reality.

The old distinction between armed and reconnaissance drones is rapidly diminishing; while it used to be that only large, military-specific drones were armed, smaller commercial and hobbyist drones are increasingly capable of carrying munition. As the Venezuela incident demonstrates, hobbyist, commercial UAVs are readily available and demonstrably capable of conducting limited attacks, not just on the battlefields of Iraq and Syria, but in a public assassination attempts. The technology is dual-use, so it has commercial and civilian applications in addition to military ones. Gradually, organizations outside of the military are purchasing traditionally commercial UAVs for various purposes including law enforcement and disaster relief. With the increased demand, private sector companies are incentivized to improve the technology’s capabilities to expand their markets and profits.

This opens the door for commercial drones to enter the realm of armament. UAV payloads vary from subkilograms to 1,000 kilograms. The upper bound of that range resembles the payloads of conventional light aircrafts while the lower is equivalent to hand grenades. In other words, the explosive capabilities of UAVs are often comparable to alternative methods and they are a reality. For example, the 2013 Boston Marathon bombing three deaths and 264 injured were caused by a 40kg payload consisting of two pressure cookers filled with nails and BBs. Today, top-shelf heavy-lifting UAVs offer payloads that range from 10 to 25kg—a mass capable of delivering one of the pressure cookers—beginning at $8,000. In the military realm, the Islamic State has already deployed  improvised explosive devices (IEDs) that can be dropped from commercial UAVs. Hobbyist drones provide actors, whether state or non-state, with a tool of harassment optimized to inflict limited damage in a manner most applicable to terrorism or assassinations.

The fact that traditionally military UAVs no longer corner the market on armament due to the democratization of air munition impacts strategic thinking because it is difficult to determine whether a drone indicates a purely unarmed reconnaissance mission or an impending attack. Because the platform’s capabilities are unknown, what it signals—an impending attack or a hobby – can no longer be assumed. Security organizations, whether civilian or military, will thus be forced to treat the platform as an immediate threat despite the potential for miscalculation.

However, when responding to a drone sighting, security forces must be cognizant of context. An approaching commercial UAV represents a different threat level at a presidential address as opposed to at a farm. The need to respond to a potential treat based on the degree of risk inherent in a situation is common; the “See Something, Say Something” campaign is predicated on citizens noticing something suspicious, like an unattended suitcase in a busy airport as opposed to the general presence of a suitcase in an airport.

The “Preventing Emerging Threats Act of 2018” attempts to strike this situational balance. While it allows personnel of the Department of Homeland Security or the Department of Justice to potentially track and destroy threatening drones, it also calls for a limited geographic and temporal scope to “only those areas and timeframes that are reasonably necessary to address a reasonable threat.” Additionally, personnel are required to “use reasonable care” to avoid interfering with authorized or non-threatening drones. Finally, the legislation includes civilian protections such as avoiding privacy and civil liberty infringement, thus acknowledging the inherent balancing act between security and privacy. By providing for context and civil liberties while outlining preventative action, this act is promising. However, the true test will be its potential implementation.

Notably absent from the legislation is any concrete collaboration with local and state governments. The act provides “support” to “State, local, or tribal law enforcement authorities” upon the request of the state’s governor or attorney general. However, a proactive approach where best practices from the federal government are shared with state and local governments could save security organizations from reinventing the wheel. It would also provide a baseline understanding should a local situation arise requiring federal resources. However, information sharing should not be limited to federal-state relationships—interstate sharing should also play a role. By increasing overall local enforcement awareness and capacity through collaboration, the risk is more likely to be mitigated.

The combination of availability and munition capability renders the armament of commercial drones to be a significant civilian and military concern. By acknowledging this potential threat, the “Preventing Emerging Threats Act of 2018” attempts to create the necessary security precautions while acknowledging the importance of context and civil liberty concerns. However, more must be done to engage with and train those on the front lines—local and state authorities.

Kathryn Dura is a researcher for the Technology and National Security Program at the Center for a New American Security (CNAS).