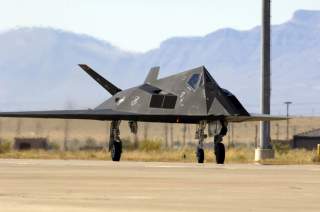 The Americans were up to something, and the Soviets knew it.

In the late 1970s and early ‘80s, the U.S. military was quietly developing sophisticated stealth technology meant to help aircraft evade detection by radar and other sensors.

Soviet intelligence agents had a pretty good idea what was going on. Not necessarily because they had eavesdropped on Pentagon communications or infiltrated the U.S. aerospace industry. They knew about stealth because they routinely read and translated American trade magazines and hobbyist books. Specifically, the reporting of one man, Bill Sweetman.

The memo describes Sweetman as “one of the most well-respected and authoritative reporters covering U.S. stealth programs,” and says that Sweetman’s reporting accounted for 40 percent of the references to U.S. and European press reports in Soviet literature on stealth. And partially as a result, the Soviets “likely have a good understanding of U.S. stealth programs” and “have begun a stealth development program,” the 25-year-old CIA memo claims.

The collapse of the Soviet Union, just three years after the document was written, stalled Moscow’s work on stealth. Russian firm Sukhoi unveiled its first radar-evading fighter prototype in 2009, 26 years after America’s original F-117 stealth warplane entered front-line service. But at the time the CIA memo was drafted, U.S. intelligence agents predicted a very different outcome. “The Soviets may be at the prototype stage,” the memo warns.

To his colleagues, Sweetman’s influence comes as no surprise. A mischievous 50-something, born in Great Britain and now living in America, Sweetman has long been the bane of Pentagon officials desperately trying to prevent, or at least control, public mention of their expensive—and sometimes flawed—new gadgets.

Sweetman was my boss at Defense Technology International a few years ago.

Since the late 1970s, Sweetman has tracked down secret warplanes, poured cold water on fear-mongering Pentagon assessments of Soviet weapons, poked holes in manufacturers’ promises of cheap, super-high-tech new aircraft designs and, in one 2010 incident, got briefly barred from covering Lockheed Martin’s controversial F-35 stealth fighter after writing on his Facebook page that the company’s “bullshit is expected to be dense.”

Now reporting for Aviation Week, Sweetman combines a clear writing style with deep technical expertise and an extensive network of sources to pull off some of the best aerospace reporting in the world. He was among the first to spot the U.S. Air Force’s secretive Sentinel spy drone and lately has been trying to shed some light on a new American stealth bomber prototype in development.

He helped reveal the radar-evading helicopter the U.S. Army used to hunt and kill Osama Bin Laden, describing the expose as “quick-draw fun.”

What’s most remarkable is that Sweetman was barely 30 when the Soviets and the CIA wised up to the intelligence bonanza his reporting represented. Sweetman started young, answering an ad in Flight for a cut-rate aviation reporter, “thinking that I was on a gap year before Uni,” he said. He just “never left,” he told Hush Kit.

While the CIA memo’s tone seems to be one of gruff admiration, it’s not entirely clear today how the agency really felt about Sweetman and his influence back in 1988. In the declassified memo, half a page is redacted following the first mention of the reporter.