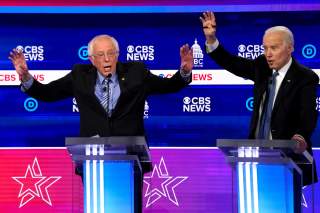 At the South Carolina debate tonight, Democratic presidential contenders may finally slam Bernie Sanders on his ambitious policy agenda and lifelong support of “democratic socialism.” Yet based on past debates, these attacks will merely be a slightly more energetic repetition of past criticisms. Bernie doesn’t have a plan to pay for his agenda. Bernie’s Medicare for All plan would turn off 160 million voters who like their private health insurance. And, now, Bernie said too many nice things about Fidel Castro.

If that’s the case, Sanders will likely be the 2020 Democratic presidential nominee. Those first two attacks haven’t really worked so far. And I am skeptical of the third. The Cuban Revolution was a long time ago. It’s as distant from today as it is from the Spanish-American War (which began after the USS Maine exploded in Havana Harbor in Cuba). Not sure of the resonance there with millennials.

Unfortunately for Sanders’ rivals, the evolution of Democratic politics and policy has made off–limits many more compelling arguments. While Sanders may not be a card-carrying Democrat, the party today doesn’t tell a story of modern America that is fundamentally any different than the one he tells: American capitalism has been badly failing workers since taxes were high and unions were strong in the postwar decades. And now we’re in Oligarchic Late Capitalism where economic failure has been joined with democratic failure. Billionaires are a policy failure, too. Big Tech is nothing more than a collection of monopolists exploiting our data. Greedy Silicon Valley. Greedy Wall Street. Greedy Big Oil. Greedy Big Pharma.

Take the issue of wage stagnation. Could Democrats even hint that Bernie is wrong, that there’s strong evidence showing wages, in fact, have not been flat for decades? As a JPMorgan analysis recently pointed out: “Real median weekly earnings for full-time workers have been hitting new highs, as have median household incomes, especially after adjusting for declines in household size.” This chart doesn’t fit the wage stagnation thesis:

Indeed, as my AEI colleague Michael Strain explains in The American Dream Is Not Dead: (But Populism Could Kill It): “Wages for typical workers have not stagnated for decades. Typical workers have not worked for several decades without a pay increase. A 34 percent increase in purchasing power over the last 30 years is not reasonably described as stagnant growth.”

Or how about pointing out all the ways Scandinavia is nothing like the Bernie Sanders model? It has billionaires. And low corporate taxes. And plenty of co–pays and deductibles in its healthcare system. Could a Democrat make that case without accusations of being GOP-lite? Can a 2020 Democrats make an affirmative and unapologetic case for market capitalism? It will be interesting to see if Sanders’ rivals can work their way out of this political and policy puzzle.

This article by James Pethokoukis first appeared at AEI.