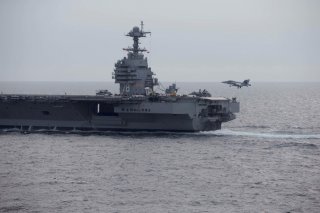 “Seasons don’t fear the reaper,” and perhaps the United States Navy also doesn’t need to fear China’s and Russia’s attempts to build a “carrier killer.” The newest aircraft carrier successfully survived an explosion near the hull equivalent to a 3.9 magnitude earthquake.

The recent completion of the U.S. Navy’s full ship shock trial (FSST) testing of the USS Gerald R. Ford (CVN-78) off the coast of Florida involved the controlled detonation of some 40,000 pounds of ordnance in the water near the hull. It is considered one of the most severe tests a modern warship can face. However, as expected, the ship passed the final of three FSST tests without incident—no major injuries, no fires, and most notably no flooding on the newly-built aircraft carrier. Helicopters were even able to land on the deck of the carrier just minutes after the controlled detonation, whilst other assets were back to business as usual.

The previous trials involving controlled explosions took place on June 18 and July 16, and as with the most recent test, the ship survived intact, notably with less damage than even expected.

“The tests demonstrated – and proved to the crew, fairly dramatically – that the ship will be able to withstand formidable shocks and continue to operate under extreme conditions,” said Brian Metcalf, the manager of the navy’s future aircraft carrier program office.

The last full shock trials involving U.S. Navy warships were conducted in 2016 with two littoral combat ships; while the last aircraft carrier, USS Theodore Roosevelt (CVN-71), to actually undergo such an extreme test took place back when President George H.W. Bush was in office in 1987.

These recent FSST tests were actually expected to provide highly valuable data that can help the U.S. Navy determine if any modifications need to be made to future Ford-class carriers, the first new design since the Nimitz-class began to enter service in the 1970s.

Currently, two additional Ford-class carriers—the USS John F. Kennedy (CVN-79) and USS Enterprise (CVN-80)—are currently under construction while two more have been ordered. The Ford-class is meant to replace the Nimitz-class carriers on a one-to-one basis beginning with CVN-79 by 2025.

Besides providing crucial data for carrier design, the tests may have served another purpose—potentially to determine how the carrier would have handled a near strike from a “carrier killer” missile launched by Russia or China.

China has developed two different anti-ship ballistic missiles including the DF-21D and the DF-26, both of which Beijing has described as an “aircraft carrier killer.” The missiles were reportedly used to strike a moving target thousands of kilometers away in the South China Sea last summer. Additionally, Russia has been conducting tests of its Tsirkon (Zircon) hypersonic anti-ship cruise missile, which Moscow has claimed can reach speeds of Mach 9.

The FSST could be an indication that the carrier could survive a “near miss.”

“Besides data collection, another reason to announce it was to send a message to China and Russia that the US aircraft carriers have super resilience and they are not worried about Chinese or Russian conventional anti-ship weapons,” commentator and former Chinese military instructor Song Zhongping told the South China Morning Post. “The 40,000 lbs explosive blast was much bigger than any single warhead of a conventional missile or torpedo.”

However, there are still other dangers from a missile, even if it doesn’t make a direct hit.

“Ballistic missiles or hypersonic missiles could also carry electromagnetic pulse weapons that are detonated at high altitude and cause damage to the aircraft carrier, or even take it completely out of combat,” added Song.

Still, the fact that a U.S. carrier can withstand an earthquake-sized explosion that would bring down buildings should be seen as impressive. To date the Chinese haven’t even attempted to put their respective carriers through any similar tests—so what message does that send?