Recession, Depression or Boom? How Will Coronavirus Impact the Economy? 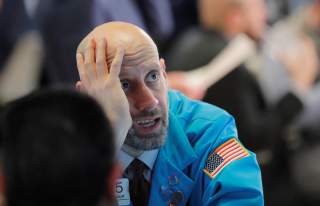 The US and Australian share markets were touching record highs until 21 February, when they woke up to the possibility that the novel coronavirus—which had by that stage infected 78,000 people and killed nearly 2,400—would have a global economic impact.

The immediate trigger for the market taking fright was the report of outbreaks in South Korea, Japan, Italy and Iran, which led to concern that the virus wasn’t confined to China’s central province of Hubei but was becoming a global pandemic.

But just as the course of the virus is uncertain, so too is its likely economic impact; predictions vary wildly and it’s difficult to trace the effects of previous epidemics.

In its interim economic assessment released on 2 March, the OECD forecast that global economic growth will be just 2.4% this year, down from 2.9% in 2019. This represents lost output of around US$425 billion.

The OECD says the projected drop reflects the impact of the virus on confidence, financial markets, the travel industry and business supply chains.

Modelling by Australian National University economists Warwick McKibbin and Roshen Fernando comes up with much larger numbers, showing a pandemic would lead to a loss of global production of anywhere from US$2 trillion to US$9 trillion, depending on how many are infected and killed by the virus. Their modelling assumes a pandemic results in the death of at least 15,000 people and possibly as many as 68,000.

However, it’s been hard to identify the economic effects of past global health crises. A study conducted at the height of the AIDS epidemic in the mid-1990s found it was impossible to detect a statistically significant effect on per capita income in the African economies where it hit hardest.

Moreover, the study by one of the world’s leading experts in the economics of demography, Harvard’s David Bloom, along with Melbourne University’s health economist, Ajay Mahal, found that neither the bubonic plague in the 14th century nor the Spanish flu of 1918–1920 was associated with any measurable fall in incomes or output.

In the case of AIDS, they suggest that the African countries most affected already had high unemployment, so labour shortages didn’t emerge, despite the high impact on working-age men.   Higher income and more productive workers were more likely to take preventive measures and avoid the disease, with the burden falling most heavily upon the poor. The greatest responsibility for healthcare was taken on by community-based organisations and family networks, which provided services more efficiently than the formal health system.

About 75 million people are estimated to have been infected with HIV since the start of the epidemic in the early 1980s, and 32 million have died.

In the case of the bubonic plague, which spread in several waves through Western Europe between 1348 and 1374 killing around a quarter of the population, the researchers were able to track the wages of unskilled British labourers working on the estates of the bishops of Winchester between 1310 and 1449, using a measure of inflation calculated with reference to the historical price of wheat. They could see the effect of the plague on population measurements, but there was no statistically significant effect on real wages.

The Spanish flu epidemic had its greatest impact in India, claiming an estimated 20 million lives or 6.2% of the country’s population. The study compared the acreage sown to crops in the provinces that were worst hit with those with lower mortality rates and found there was no measurable difference in output per person.

A more recent study done for the World Health Organization by two leading health economists,  Victoria Fan and Dean Jamison, along with former US Treasury secretary Larry Summers, says looking at potential loss in per capita income is the wrong way to measure the impact of an epidemic, because it puts no value at all on the lives that are lost.

‘If, in assessments of investments in pandemic preparedness and mitigation, we neglect this dimension of loss, we will underestimate the value of such investments, relative to alternative uses of public finances’, they say.

Their study used methods borrowed from the life insurance industry to estimate the expected loss from an influenza pandemic that resulted in 720,000 deaths, and came up with an economic impact of US$500 billion.

They noted that their study did not take account of the cost of non-fatal illness or the fear of pandemics, adding that intense media coverage may lead populations to overreact to mild pandemics.

Fear can have a big effect. A later report by Bloom for the International Monetary Fund notes that Liberia’s GDP growth collapsed by 8 percentage points in the wake of the Ebola outbreak in 2013–14, even though the country’s overall death rate fell in that period.

For the moment, it is the mixture of fear of the pandemic and official efforts to slow the spread of coronavirus that are having the biggest impact. Quarantines are making it difficult for workers in China to get to their workplaces, while travel restrictions are throttling the universities. A mix of travel restrictions and public fear has led to plunging tourism turnover.

Yesterday, the US Federal Reserve announced an unscheduled cut in interest rates by 0.5 of a percentage point. The Reserve Bank of Australia also lowered interest rates yesterday, by 0.25 basis points, and there are calls for the government to provide the sort of economic stimulus that helped Australia avoid the worst of the 2008 global financial crisis. However, the reality is that such policy measures have no effect on the supply bottlenecks that are squeezing businesses.

Then there’s the possibility of second-round effects. Economists have been warning for years about excessive Chinese corporate indebtedness, so there are concerns that the drop in turnover might result in a debt crisis. Just last week, news emerged that the Chinese aviation and property development conglomerate HNA Group is in crisis and seeking a government bailout over its US$75 billion debt while electric car maker Nio is trying to secure a US$1.4 billion bailout from a municipal government.

There are similar vulnerabilities in the US leveraged loan and junk bond markets, where debts can keep being rolled over only as long as underlying demand in the economy remains strong.

This article first appeared at the Australian Strategy Policy Institute.