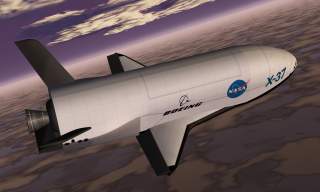 With 719 days of orbital spaceflight and counting, the current X-37B mission – known as Orbital Test Vehicle (OTV-5) – has broken a new spaceflight-duration record that was previously set at 717 days, 20 hours and 42 minutes during the previous mission (OTV-4).

According to Space.com, OTV-5, began on Sep. 7, 2017, with a liftoff atop a SpaceX Falcon 9 rocket. It’s unclear what the space plane is doing up there now, or what it has done on past flights; X-37B missions are classified, and the Air Force, therefore, tends to speak of the vehicle and its activities in general terms.

The test campaign seems to involve pushing the X-37B’s endurance because each of the five missions has lasted longer than its predecessor.

However, OTV-5 is nowhere near the overall spaceflight-duration record. Earth-observation and communications satellites commonly operate for five years or more, as do robotic planetary explorers. NASA’s Curiosity rover has been exploring Mars for more than seven years, for example, and the agency’s twin Voyager probes are still going strong in interstellar space more than four decades after their launches.

The X-37B Orbital Test Vehicle, or OTV, is an experimental test program to demonstrate technologies for a reliable, reusable, unmanned space test platform for the U.S. Air Force (USAF), the service states. The Air Force has at least two X-37Bs, both of which were built by Boeing. The primary objectives of the X-37B are twofold; reusable spacecraft technologies for America’s future in space and operating experiments which can be returned to, and examined, on Earth.

The X-37B is the first vehicle since NASA’s Shuttle Orbiter with the ability to return experiments to Earth for further inspection and analysis, but the X-37B can stay in space for much longer.

The Air Force has successfully flown four X-37B missions, OTV-1 through OTV-4, beginning with its first launch on April 22, 2010 from Cape Canaveral Air Force Station, Fla. OTV-1 through OTV-3 all landed successfully at Vandenberg AFB, Calif., and the most recent mission, OTV-4, successfully landed at Kennedy Space Center, Fla. The first four OTV missions have spent a total of 2,085 days on orbit, successfully checking out the X-37B’s reusable flight, reentry and landing technologies as well as operating experiments to benefit the national space community.