Reducing America's Dependence on China Is Now a Strategic Necessity 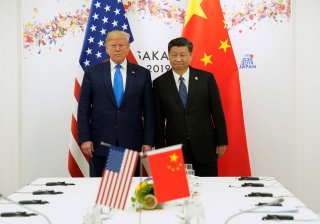 China failed to contain the coronavirus in its early days. In fact, Beijing did not quickly notify and work with international bodies like the World Health Organization and the rest of the international community. Had China acted it could have prevented a local outbreak in Hubei province from becoming a global pandemic. All of this shows that despite its outsize power and influence on the global stage, Beijing is not a responsible player. And now America finds itself with remarkably little power to do anything about it.

For three decades, Americans have allowed themselves to become increasingly economically dependent on China, first as the latter-day “workshop of the World,” then as the world’s greatest creditor. Over the last couple of years, the United States has also started becoming technologically dependent on China: the main example of this being the roll-out of 5G wireless technology, where the West has lagged significantly behind Chinese companies in the development and deployment of this next-generation tech. In addition, European countries that wished to start deploying the new networks had to look to China to source the necessary equipment, rather than the United States—with all the security issues that entails.

And this is only the beginning. China is already racing ahead in renewable energy, quantum communications technologies and artificial intelligence. It will soon do the same for bio-sciences, energy storage, material sciences and others. In the future, if America and other democracies want access to all the latest developments in these essential technologies, they will be expected to kowtow to the authoritarian oligarchy at the top of the Chinese Communist Party —just as developing countries who rely on Chinese investment and debt today must do.

At this moment in time, Beijing is ruled by President-for-Life, Xi Jinping, a hardline nationalist authoritarian. It was not always like this. In fact, the leadership of China in the first decade of the 2000s was pretty endurable and did not rule for life. This shift under Xi will not last indefinitely either. But it will be like this for the foreseeable future, and America’s dependence on a nationalist China is neither necessary nor inevitable. But if the United States does allow itself to become so increasingly dependent on China, the current administration in Beijing will expect Washington to submit to China’s dictates.

If America’s leaders wish to avoid this humiliation in the years to come, they will need to take a leaf from Beijing’s playbook: Washington must realize that free markets will not auto-magically deliver technological supremacy or even technological autonomy. Those things will only be achieved in the same way Beijing is achieving them and the way America achieved in the past with the Apollo program and the DARPA infrastructure. This is to say, Western governments must today take charge of pushing forward the science and technologies which will underpin their economies tomorrow.

Meanwhile, it is the same ideas around free trade, that have allowed Western companies to move industrial capacity out of their countries and into China—all while failing to deliver on the promise of a more peaceful world underpinned by economic inter-dependence. As the land-grabs in the South China Sea and the ports of Pakistan, Sri Lanka, Djibouti and other places show, Beijing did not get that memo. In international free markets, America has built a system of competition in which Washington is failing, because the United States started believing its own propaganda, while level-headed players like Beijing and Moscow, never lost sight of the real meaning of power on the global stage. They understand how this game is meant to be played.

It is not yet too late. There is no area of science or technology where China has a categorical or insurmountable lead. And America still, just about, leads in most areas. But if the West wishes to maintain its power, and indeed its autonomy and independence, policymakers must understand that this cannot be taken for granted. Washington cannot just liberalize markets, defund all government science and research initiatives and hope for the best as has been done for decades now. These things must be done with intent and foresight. And they require serious funding—like Washington used to do during and after World War II. And if Washington waits for these things to develop themselves, they will not. China will develop them. And the West will have to go begging to Beijing for permission to use them if democracies want their economies to remain competitive for the remainder of this century.

Dr. Azeem Ibrahim is a Director at the Center for Global Policy in Washington, D.C.