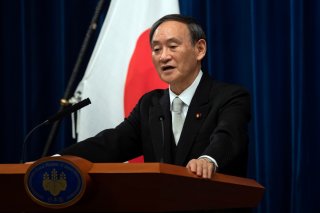 With Yoshihide Suga confirmed as Japan’s new prime minister, one of the first pressing policy choices that he faces concerns the future of Japan’s ballistic and cruise missile defense (BMD) architecture. Since Japan faces a multitude of missile threats from North Korea and China, Prime Minister Suga should propose a comprehensive solution that ensures improved persistence and distribution of BMD capabilities to reduce the burden on the U.S. and Japanese maritime units as well as other shared alliance interests.

A new BMD plan would help address the gap created by the Japanese defense ministry’s decision not to acquire two land-based Aegis Ashore (AA) systems for use at separate sites. Until June, Japan was intent on installing these systems to enhance its existing BMD assets, which include a maritime component of Aegis BMD-equipped naval vessels and land-based components consisting of the Patriot Advanced Capability-3 (PAC-3) and AN/TPY-2 Radar. Deploying Aegis Ashore would have decreased the current burden on the maritime units by assuming the majority of responsibilities for protecting Japan against North Korean ballistic missiles.

The Japanese Defense Ministry, however, scrapped this plan due to growing perceptions among Tokyo’s leadership that there would be added costs to enhance the system’s safety measures. These enhancements would ease a backlash from civilians living near the planned AA sites, who cited concerns of the potential damage to residential areas due to falling rocket boosters from the system’s interceptors.

An alternative solution under consideration in Tokyo is placing the AA’s radars and missile interceptors on specially constructed naval vessels rather than on land. Moving these capabilities off land would resolve the local communities’ concerns and potentially avoid the added costs for boosting safety measures. However, this option still leaves Japan’s BMD architecture with vulnerabilities in its coverage. Admiral Hiroshi Yamamura of Japan’s Maritime Self Defense Force argued that Japan’s additional BMD capability must not be influenced by the weather or climate. This is because naval vessels provide less persistent coverage than land-based systems, such as AA, since vessels cannot perform their BMD functions in rough weather or sea conditions.

Japan is also considering the acquisition of a limited strike capability that can range enemy ships and land-based assets to deter and if necessary defeat any aggressive actions. These capabilities would be deployed to supplement Tokyo’s missile defense architecture by creating deterrence capabilities. This, however, is a controversial option due to Japan’s pacifist constitution, which forbids Tokyo from acquiring offensive and power projection capabilities. Additionally, Komeito, the ruling Liberal Democratic Party’s junior coalition partner, opposes the plan for this very reason.

Still, Japan needs an alternative to the missile interception capabilities provided by land-based AA. Specifically, the replacement to this system should still prioritize improved persistence and distribution of BMD capabilities to increase flexibility and relieve pressure on maritime assets. This is specifically important because AA would have enabled Japan to more effectively support Washington’s regional military posture and its efforts to deter China’s aggressive actions throughout the Indo-Pacific. Deploying AA to Japan aimed not only to boost Japan’s own ballistic missile defense capabilities, but also to lessen the burden on Japanese Self Defense Force Aegis-equipped destroyers and allow them to conduct other missions. The deployment also sought to increase the U.S. military’s flexibility to deploy its BMD-equipped naval vessels stationed in Japan to other areas under threat of Chinese incursion and power projection, such as the East China Sea, South China Sea, and Indian Ocean.

It is imperative to address Admiral Yamaura’s concerns regarding coverage in intercepting capabilities. However, the United States and Japan could alleviate these issues by strengthening other elements of a more comprehensive BMD solution to better anticipate enemy missile strikes. For instance, one area for further U.S.-Japan collaboration is the development and fielding of a distributed network of mobile and fixed sensors and radars as well as satellites to augment the alliance’s early warning and detection capabilities. Aerial drones, such as the MQ-9 Reaper unmanned aerial vehicle, should be considered as a possibility for mobile options. The U.S. has been equipping these drones with the necessary capabilities to support BMD missions. Washington already tested this drone in the Indo-Pacific in June 2016 during the Pacific Dragon joint BMD exercise with Japan and South Korea.

Additionally, low-Earth orbit (LEO) satellites could further improve the United States and Japan’s missile defense, as these satellites may be the only assets capable of detecting China’s newly emerging hypersonic missiles. LEO satellites also can evade already deployed ground and sea-based radars as well as most military satellites thanks to their high speed and low altitude flight path.

Japan should also assess its ability to detect and engage cruise missile threats to critical land-based nodes such as airfields and logistics hubs. U.S. forces in Japan rely on the joint “agile combat employment” concept and on Japanese forces to protect them and their facilities. This new concept calls for the U.S. Air Force to be able to launch, operate, and maintain fighter jets away from its main bases and in unorthodox locations, such as allied nation airfields and civilian airports, to evade Russian and Chinese cruise missile strikes. Deploying land-based missile defense assets, such as AA, would supplement the alliance’s ability to defend against cruise missiles. This cruise missile defense assessment should also drive a number of air, ground, and maritime self-defense force initiatives, beyond Aegis.

To maximize the effectiveness of these new additions, both countries should also ensure seamless integration of any new capabilities with existing ones to ensure that the alliance’s interoperable command and control systems, namely the Bilateral Joint Operations Command Center, can detect, track, assign and, if necessary, engage all incoming threats with the most appropriate defense capability. This will be essential for the U.S. and Japan to uphold a mutually supporting, overlapping, and reinforcing defense.

A final priority for Japan’s new BMD plan should be to continue efforts to integrate its own capabilities with South Korea’s missile defense units. Currently, Japan and South Korea cannot share targeting data between their naval BMD units, because their vessels’ onboard Aegis systems lack a common encryption system. As both Seoul and Tokyo face common threats from North Korea and China, exchanging intelligence is not only critical for situational awareness, but also helpful in strengthening trilateral security cooperation essential to the U.S. extended deterrence posture.

Washington’s allies in turn should consider adopting a common encryption system for their Aegis vessels shared with the U.S. to boost trilateral ship-to-ship interoperability. While recent political and economic friction between Tokyo and Seoul may obstruct immediate cooperation, Prime Minister Suga could take a crucial step forward in ameliorating tensions with South Korea by offering this joint solution to a shared security issue.

Thus, Prime Minister Suga could mark his first policy success as Japan’s new leader by implementing a robust and comprehensive missile defense plan. This will not only help Suga stabilize his leadership, but also put Japan in a better position to defend and deter against its adversaries with the support of its allies and partners.

Mathew Ha is a research analyst focused on East Asia at the Foundation for Defense of Democracies (FDD), where he also contributes to FDD’s Center on Military and Political Power (CMPP). Follow him on Twitter @MatJunsuk. FDD is a Washington-based, nonpartisan research institute focusing on national security and foreign policy.