Refurbished Like New? the Russian Navy Is Getting Old Kirov Battlecruisers Back Online 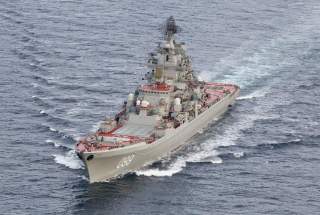 Key point: These large warships still can cause a lot of damage. However, generally, the Russian navy is downsizing and upgrading what it has.

But two other old Kirovs are slated for dismantling. And the Russian navy’s overall transformation into a smaller force with mostly smaller vessels probably will continue.

Sevmash shipyard will deliver the Kirov-class Admiral Nakhimov to the Russian Navy in 2022, yard chief Mikhail Budnichenko told TASS at the Army-2019 international military and technical forum on June 27, 2019.

"The cruiser’s delivery to the navy will take place in 2022," Budnichenko said.

Work on the cruiser’s hull is complete, Budnichenko added. “Shipbuilders are loading systems and mechanisms onto it.”

The 826-feet-long, 24,000-ton-displacement Admiral Nakhimov originally entered service in 1988. The ship has been at Sevmash since 1999. Refurbishment began in 2013. Current upgrades include the fitting of Kalibr and Oniks cruise missiles.

While Admiral Nakhimov could serve for decades to come alongside sister ship Petr Velikiy, the Russian navy reportedly has decided to dismantle two other laid-up Kirov-class cruisers.

The recycling of Admiral Ushakov and Admiral Lazarev could accelerate the fleet’s evolution into a leaner but more modern force.

The 1980s-vintage Kirovs by far are the largest surface combatants in the world. The Soviet navy planned to deploy them against American carrier battle groups and supply convoys.

But that has proved too costly for the cash-strapped Russian navy. Admiral Nakhimov’s refurbishment likewise has been slow and difficult, according to Russian Defense Policy.

In mid-2013, the [ministry of defense] gave Sevmash a contract for Nakhimov’s repair and modernization. It was supposed to return to the fleet in 2018. But work on the ship didn’t commence until October 2014. About this time it was expected to rejoin the navy by 2020.

There are rumors the Russian navy soon also will decommission its only aircraft carrier Admiral Kuznetsov, which in October 2018 suffered serious damage at the 82nd Repair Shipyard in Roslyakovo when the PD-50 dry-dock sank while Kuznetsov was aboard for repairs.

Even before PD-50's sinking, the Russian fleet slowly was replacing big, old ships with much smaller new ones that can't sail as far or carry as much weaponry, but which are cheaper and easier to operate and repair than the old vessels are.

The Kremlin bought four new, small warships in 2018. The Russian fleet numbers some 300 vessels, most of them displacing just a few thousand tons. For comparison, the U.S. Navy has roughly the same number of ships, but they on average are much larger than Russian vessels are.

Moscow had planned on extending the service lives of its carrier and other warships from the 1980s in order to complement the newer vessels. For long-range deployments across the Atlantic or to war zones such as Syria, Russia tended to send Kuznetsov and equally aged, Soviet-built destroyers and cruisers.

If Kuznetsov decommissions, the two remaining Kirovs after 2022 could become the Russian fleet’s main ships for high-profile, overseas deployments.