In a Region that Usually Exports Migrants, Kazakhstan Becomes a Major Destination 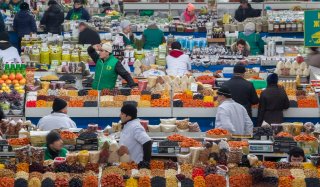 On a recent trip to Almaty, the largest city in Kazakhstan, I noticed that the fruit sellers in the city’s famous Green Bazaar were speaking Tajik. To their surprise, I started speaking Tajik with them. Firdavs, one of the fruit sellers, and his family moved from northern Tajikistan over twenty years ago. Central Asia is one of the most migration-dependent regions in the world. Around one-third of the Tajik and Kyrgyz economies are based on remittances sent back from migrant workers, mostly in Russia. But Kazakhstan, the region’s richest country with a gross domestic product per capita on par with Russia, is also becoming a major destination for migrants from the rest of the region.

After the fall of the Soviet Union in the 1990s, Kazakhstan became a net exporter of migrants as birth rates declined, and Germans, Russians, Ukrainians, and others that immigrated to the region during Russian and Soviet rule left the region. The population shrank from 16.1 million to 14.5 million in the 1990s.

But a decade ago, Kazakhstan went from being a net exporter to a net receiver of migrants as the state-sponsored Oralman program repatriated ethnic Kazakhs from neighboring countries, and an uptick in migration from Central Asian states brought new arrivals to the country. By 2020, there were over one million migrants officially registered in Kazakhstan, mostly from the region’s most populous state Uzbekistan—up from 16,000 in 2003. But the official figures only tell part of the story. Previous research indicates that the majority of migrants work without official permission and are therefore not officially counted as migrant workers by authorities.

Rising migration has been driven by a construction boom in Kazakhstan, which is a major sector for migrant laborers. But rising numbers have also been driven by developments to the north in the main destination for Central Asian migrants, Russia. In 2012, the Russian government introduced a five-year re-entry ban for those staying illegally in Russia for more than six months. This ban rendered millions of Central Asians unable to enter the country. Additionally, U.S. and European sanctions in reaction to Russia’s annexation of Crimea coupled with falling oil prices sent Russia’s economy into a recession in 2014, causing remittances sent back to Central Asia to contract by one-third.

The Covid-19 pandemic compounded these developments. Because Russia closed its borders from March through August in 2020, and plane ticket prices soared after borders reopened, Russia has become a less attractive option for Uzbek, Tajik, and Kyrgyz migrants. An increasing number have opted to relocate to Kazakhstan instead.

With its similar culture and language (Kazakh is a Turkic language like Kyrgyz and Uzbek) and its geographic proximity, Kazakhstan was a natural destination for migrants who would have gone to Russia. Despite the pandemic once more unveiling the dangers of an overreliance on migration in Central Asia, none of the Central Asian governments have formulated plans to reduce dependence on migration. In fact, migration from Tajikistan hit record highs in 2021. As Kazakhstan recovers from the pandemic and moves from a decline of 2.5 percent in 2020 to an expected growth rate of 3.2 percent in 2021, it looks like the country will continue to be a destination for migrants from neighboring states, fueling the government’s ambition to become one of the thirty most developed countries by the middle of the century.

Edward Lemon is a Research Assistant Professor at Texas A&M University’s Department of International Affairs in The Bush School of Government & Public Service.