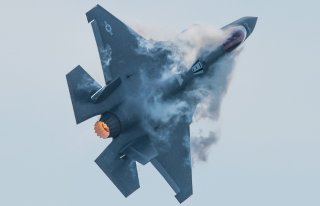 More than five years ago, reports emerged citing Edwards Air Force Base Tests results of experiments in which F-16 Fighting Falcons were placed in air-to-air combat against F-35 stealth jets to assess the ability of a fifth-generation fighter jet dogfight.

Various news reports said results showed an F-16 jet actually “out-performed” an F-35 in a dogfight. The reports inspired a large amount of discussion about the F-35 stealth fighter jet. However, key contextual elements of the discussion were often excluded in these reports. An Air Force pilot who was there at the time of the dogfight says that despite the results, the F-35 fighter jet would not be out-performed by an F-16 Fighting Falcon. After all, an F-35 jet can dogfight but it might not need to very often given the range, accuracy and fidelity of its sensors and onboard computer processing system.

“I was at Edwards Air Force Base when the test pilots were there and they were writing that original report. It’s been the narrative ever since and I want to say a few things about that. . . . First of all, it should be noted the aircraft (F-35) was in its infancy stages and we were still just trying to learn how to fly the airplane,” Chris “Worm” Spinelli, an F-35 test pilot for Lockheed Martin, told the National Interest. “The entire CLAW [Flight Control Laws] hadn’t been delivered yet so the guys hadn’t really developed tactics, techniques, and procedures, etc. So to say that the F-35 can’t Basic Flight Maneuver [a term for dogfight], I think, is a gross overstatement. Honestly, you know I think it would be quite eye-opening to see an F-35 and an F-16 in a BFM engagement, depending on how it was managed. Certainly, the F-35 has some advantages that the F-16 does not, particularly in its helmet integration, along with its advanced weapons, which are a lot more beneficial in platforms like the F-22 or F-35.”

While the F-35 fighter jet certainly can dogfight, a fact that is quite well known, there is much to be said about its sensor suite and computing technology. This technology may make it highly unlikely that an F-35 will be involved in a dogfight. It may be much more likely that an F-35 jet will kill enemies without being seen.

“From my perspective, having the sensor suite that we have, having sensor fusion and MADL ( F-35s Multifunction Advanced Datalink) all of those potential engagements should be avoided before we ever even get within visual range, let alone actually have to dogfight in the air, whatever the opponent is,” Monessa “Siren” Balzhiser, an F-35 production and training pilot for Lockheed Martin, told the National Interest. “The tactical scenario, more often than not, is going to be solved much further out, which is going to give us the advantage.”

I read this Air Force test report back in 2015. At the time, I received an interesting and significant response to the issue from the Pentagon’s F-35 Joint Program Office (JPO). In 2015, the JPO welcomed the report and the assessment but wanted to make certain key facts about the circumstances available as they weighed heavily upon the results. In a statement to me in 2015, the JPO said the reports on the F-35 vs. F-16 squareoff left out many crucial facts.

“The media report on the F-35 and F-16 flight does not tell the entire story,” the F-35 JPO office said in a written statement. “The F-35 involved was AF-2, which is an F-35 designed for flight sciences testing, or flying qualities, of the aircraft. It is not equipped with a number of items that make today's production F-35s 5th Generation fighters.”

The JPO statement explained that the AF-2 test aircraft did not have the mission systems software designed to utilize the aircraft’s next-generation sensors. The F-35 program office also said the AF-2 test aircraft was not equipped with the F-35 jet’s special stealth coating, which was designed to make the aircraft invisible to enemy radar. The statement also noted that the AF-2 was “not equipped with the weapons or software that allow the F-35 pilot to turn, aim a weapon with the helmet, and fire at an enemy without having to point the airplane at its target.”

"The F-35s won each of those encounters because of its sensors, weapons, and stealth technology," the statement said.

What is significant about these 2015 statements from the JPO is that they were from six years ago. The F-35 jet has continued to evolve substantially since that time, which only reinforces the point that the office was trying to make.

Years after these dogfight questions surfaced, F-35 pilots like Tony “Brick” Wilson who have flown fourth and fifth-generation jets for years, reflected in great detail upon how an F-35 stealth fighter jet compares with an F-16 Fighting Falcon and F/A-18 Hornet when it comes to aerial combat. Wilson is a former F/A-18 pilot and current Chief of Fighter Flight Operations for Lockheed Martin with roots in the F/A-18 community.

“[The F/A-18] has excellent high airway maneuvering capability,” Wilson explained. “So one of the things that we would always try to achieve was to force the fighter jet to go in the direction that would be advantageous. . . . By comparison, the F-16 is a great ‘weight fighter.’ It has a lot of high thrust for the weight. Imagine going around a racetrack, except in this case, you want to come around the racetrack faster so you can get behind the other racer and shoot them.”

“What the F-35 brings to the pilot is actually a combination of both,” Wilson added. “It has fantastic high airway capability but doesn't sacrifice thrust to weight. The thrust-to-weight ratio that I get out of the F-35 is fantastic. So now I have multiple options when I find myself in a dogfight situation depending on what the threat is that I’m dealing with. I can choose which fight is going to best suit me against that opponent.”