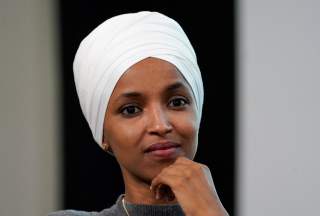 “The House of Representatives must urgently investigate and resolve the serious allegations of wrongdoing by Rep. Omar,” Fitton said.

“Substantial, compelling and, to date, unrefuted evidence” supports the allegations, he said.

The evidence developed against Rep. Omar was the result of a three-year-long investigation in both the United States and the United Kingdom by Mr. Steinberg and his investigative reporter colleagues Preya Samsundar and Scott Johnson. It is supported by information gathered from public records, social media postings, genealogy databases, computer forensic analysis, unaltered digital photographs, discussions between the investigative reporters and the subjects of the investigation themselves, and information supplied by confidential sources within the Somali-American community.

Omar requested a “default” divorce from Elmi in 2017, an unusual proceeding used where one spouse has disappeared and cannot be located.

To obtain a divorce, Omar filed papers with the Minnesota district court swearing under penalty of perjury that she last saw him in 2011 and had no clues about how to contact him through other people.

She swore that she didn’t know the name of a single member of her husband’s family, and that they didn’t have any friends or acquaintances in common who might know how to locate him, according to papers she filed with the Minnesota district court to secure a divorce.

She swore she tried to locate him through social media but could not, even though he had public profiles on Twitter, Facebook, and LinkedIn. Screenshots additionally show Omar continuously interacting with him on social media in the years since.

“The evidence developed by Mr. Steinberg and his colleagues demonstrates with a high degree of certainty that Ms. Omar not only had contact with Mr. Elmi, but actually met up with him in London in 2015, which is supported by photographic evidence,” Judicial Watch’s complaint says.

Of particular importance are archived photographs taken during a widely reported trip by Ilhan Omar to London in 2015, posted to her own Instagram account under her nickname ‘hameey,’ in which she poses with her husband/presumed brother, Ahmed Elmi. These photographs from 2015 are documentary evidence that in fact she met up with Mr. Elmi after June 2011 and before the date she signed the divorce document in August 2017, thereby calling into question the veracity of her claim that she had not seen Mr. Elmi since June 2011.

In Instagram screenshots, published by Powerline and conservative outlet Alpha News, and which appear to have been deleted, the two men are sometimes pictured together, and Elmi refers to Omar’s children as his “nieces.”

(The Daily Caller News Foundation has observed other social media posts published by [David] Steinberg and determined they were authentic and online at the time of publication. They were deleted soon after the article called attention to them.)

Lying on a sworn form is perjury and each charge carries five years in prison, according to Minnesota law. Questions have been raised about the accuracy of approximately six statements on the sworn form.

The substance of the reporting by Steinberg, Samsundar, and Johnson has largely been ignored by the media, but not refuted.

The journalists “have engaged in meticulous research and reporting over a period of years. They have demonstrated with a high degree of probability that Rep. Ilhan Omar has violated House Ethics Rules, federal, and state laws,” Fitton said.

Omar was fined by the Minnesota Campaign Finance and Public Disclosure Board for using campaign funds to pay for an accountant to amend her taxes after she filed taxes jointly with Hirsi while she was not married to him (filing joint taxes with a non-spouse is not permitted) and while she was actually married to another man.

Any person who willfully makes and subscribes any return, statement, or other document, which contains or is verified by a written declaration that it is made under the penalties of perjury, and which he does not believe to be true and correct as to every material matter … shall be guilty of a felony and, upon conviction thereof, shall be fined not more than $100,000 … or imprisoned not more than 3 years, or both, together with the costs of prosecution.

Fitton said the apparent sham marriage may have been motivated by student loan fraud as well as making it easier for Elmi to immigrate to the U.S. Elmi had British citizenship when he came from London, married Omar, and enrolled in North Dakota State University with her, Omar has said.

Despite Omar saying her short-lived husband was long-lost, he can be tied even this year to other members of Omar’s family.

Omar’s sister Sahra Noor, who ran a high-profile nonprofit in Minnesota, this year created a new consultancy in Kenya. Elmi, who works in digital media, appears to have created its Instagram account. Code discovered by Steinberg shows that Elmi’s name is in the source code of the website.

“She’s been unwilling to address any of these questions,” Kevin Diaz, the editor of the Star Tribune, told PolitiFact. “There was an undisputed instance of her filing her taxes improperly. And if you’re in Congress, you should explain that to your constituents.”

The Office of Congressional Ethics is comprised of non-congressmen who intake complaints and, if they deem the complaints strong, publicly refer them to the House Committee on Ethics.

“Democrats don’t file ethics complaints against Republicans and vice versa because you don’t want the tables turned,” an expert on Congress with the liberal group Demand Progress, Daniel Schuman, told The Daily Caller News Foundation. “They used to call it a Cold War detente: You don’t nuke the Russians and they don’t nuke you.”

Omar’s office did not respond to The Daily Caller News Foundation’s request for comment in time for publication.

Editor’s note: Omar has previously denied being married to her brother. The Associated Press reported last year that Omar “has denounced claims that she married her brother and committed immigration fraud as ‘disgusting lies.'”

Content created by The Daily Caller News Foundation is available without charge to any eligible news publisher that can provide a large audience. For licensing opportunities for this original content, email [email protected].