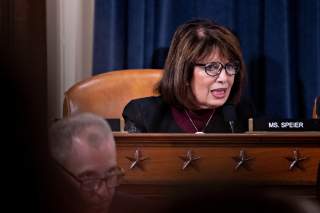 Democratic California Rep. Jackie Speier tweeted Tuesday morning that she will be calling for an investigation into Navy Secretary Richard Spencer’s dismissal over the weekend.

Speier tweeted she would be asking the Department of Defense inspector general “to investigate and determine the circumstances of” Spencer’s termination. She called Trump’s actions an effort “to subvert the military justice system” and voiced support for “uniformed leaders’ efforts to dissuade @POTUS from subverting mil justice for his personal politics.”

The next NavSec and Sec. Esper should show courage like Adm. Green and fight for a culture of accountability and rule of law among SEALs, despite tremendous pressure. I applaud uniformed leaders' efforts to dissuade @POTUS from subverting mil justice for his personal politics.

Trump tweeted Sunday that he was “not pleased” with how Gallagher’s case had been handled. That same day, Spencer released a letter acknowledging his termination and writing that it was because he disagreed with Trump on the “key principle of good order and discipline.”

The letter noted that Spencer couldn’t “in good conscience” obey Trump regarding Gallagher.

“The rule of law is what sets us apart from our adversaries,” Spencer’s letter read. “Good order and discipline is what enabled our victory against foreign tyranny time and time again. … Unfortunately it has become apparent that in this respect, I no longer share the same understanding with the Commander in Chief who appointed me, in regards to the key principle of good order and discipline.”