Rep. Lesko: Why Are Democrats Ignoring Fentanyl For Impeachment? 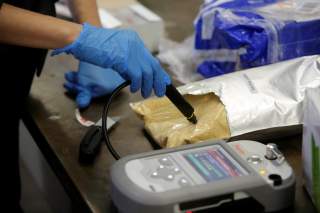 Rep. Debbie Lesko reminded members of the press Tuesday that a temporary ban on certain types of fentanyl is set to expire next week while House Democrats are making their case for impeachment.

“The scheduling of fentanyl substances is going to expire next week — next week — and the Democrats have done nothing about this,” the Arizona Republican told reporters. “We’re dealing with this impeachment stuff” instead of acting quickly to reinstitute a fentanyl ban, she added.

“People’s lives are hanging in the balance. Let’s get back to work on behalf of the American people,” Lesko wrote in a tweet Tuesday with a video of her comments.

9 more days until the ban on fentanyl expires.

Democrats are more focused on impeaching President @RealDonaldTrump than they are getting fentanyl off our streets.

People's lives are hanging in the balance. Let's get back to work on behalf of the American people. pic.twitter.com/gdadWSTE41

The Drug Enforcement Administration (DEA) invoked a ban on all fentanyl analogues in February 2018, but the ban expires Feb. 6. The Justice Department is pressuring Congress to enact a law allowing the DEA to ban the substances indefinitely, The Washington Post’s editorial board noted in a Jan. 5 op-ed.

A bipartisan group of senators passed the “Temporary Reauthorization and Study of the Emergency Scheduling of Fentanyl Analogues Act” on Jan. 16. The House of Representatives voted a day before that, on Jan. 15, to send articles of impeachment against President Donald Trump to the Senate.

Other House Republicans have criticized Democratic Rep. Jerry Nadler of New York for supposedly holding up the legislation.

“Democrats on the House Judiciary Committee’s partisan obsession with impeachment is preventing us from taking common-sense action to extend a critical tool for law enforcement to combat the trafficking of fentanyl-related substances,” Greg Walden told the Daily Caller News Foundation in a Jan. 24 statement.

“While Chairman Nadler wastes taxpayer time on a partisan impeachment sham, he is failing to do his actual job on the Judiciary Committee,” McCarthy wrote in a Jan. 21 tweet. “The Senate has unanimously (!) passed a ban on fentanyl. The same legislation languishes on Nadler’s desk.”

Nadler spokesman Daniel Schwarz told the DCNF on Jan. 24 that Nadler is aware of the legislation.

“I believe we are having a hearing on it early next week (Tuesday morning), which is needed before we can vote on anything,” Schwarz said at the time. “Not sure what the complaint is.”

He has not responded to further questions

Fentanyl was involved in more than 50% of 5,000 opioid overdose deaths in 10 states in 2016, federal data show. A dose of 2 milligrams of fentanyl can kill a unexposed people.

U.S. officials say the bulk of the drug is pouring into the country through China and parts of South America. Trump is reportedly considering an executive order to halt shipments of fentanyl, a move designed to apply pressure to China as the U.S. continues fighting the opioid crisis.