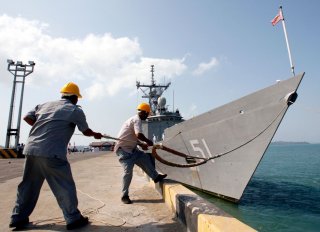 More than 1,000 defense industry jobs will be headed to northeast Wisconsin as the U.S. Navy has announced that Fincantieri Marinette Marine was awarded contracts worth up to $5.5 billion to design and build the service’s new class of frigates. The company, which was founded in 1942 along the Menominee River in Marinette, Wisconsin, has become a world-class shipbuilder, having designed and built more than 1,500 vessels.

The U.S. Department of Defense (DoD) awarded the initial contract for $795.1 million to the shipbuilder for the detail design and construction of the new class of FFG(X) frigates. The company won its designed based on its FREMM frigate that is currently in service with the French and Italian navies. If options are exercised the Wisconsin defense contractor could produce a total of 10 guided-missile frigates that would feature combat and mechanical systems suitable for use in carrier strike group (CSG) or independent operation. The work could last until 2035.

Rep. Mike Gallagher (R-Wisconsin), a member of the House Armed Services Committee, called the contract, “a massive win for Northeast Wisconsin, for America, and for the free world. For years we have worked to put Fincantieri Marinette Marine in a position to build the Navy’s new frigate and now, thanks to the hard work and unparalleled skill of their workforce, they will do just that.”

The multi-mission small surface warship is something that the Wisconsin lawmaker has said is necessary to take on new global threats, notably those from China.

“The FFG(X) will be on the frontlines of freedom, protecting our interests in contested seas, and ensuring freedom of navigation,” Gallagher added. “This is a reminder that Northeast Wisconsin always answers the call to serve the country, and that the true strength of this country is found in communities just like ours.”

Gallagher has been described as a China hawk and considers the frigate a cornerstone for growing the U.S. Navy while also addressing what could be a “constrained budget” for the DoD. This new class of frigate would be smaller than the Arleigh Burke-class destroyer, which remains the Navy’s current workhorse, but it would still be outfitted with the Aegis combat system, vertical launch tubes and SPY-6 radar systems—making it a small but powerful warship.

“Think about this as a small surface combatant,” Gallagher told Spectrumnews1.com. “It’s that smaller ship that can go places where bigger destroyer and certainly an aircraft carrier can’t go.”

Breaking Defense added that smaller and cheaper warships are among the biggest selling points for the Navy leadership team that desires a 355-plus fleet, and such vessels could also show American presence in the thousands of island atolls that are being closely eyed by Beijing.

This month Gallagher was appointed to serve on a new Congressional task force on China, which is made up of 15 members across 14 House committees and will devise a legislative strategy on China policy. Gallagher supports growing the Navy behind the current 355-ship goal, but has said that to get there the new ships will certainly have to be cheaper, smaller and some may even have to be unmanned.

“Much of that growth is going to have to come from small surface combatants and smaller ships, things below the level of carriers and destroyers,” he told BreakingDefense.

The FFG(X), which will be produced in Gallagher’s state, could be the shape of things to come in this new Navy. “It was a great day for Wisconsin,” he added. “And a bad day for the PLA Navy.”