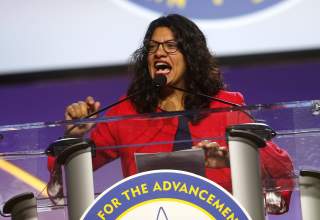 Democratic Michigan Rep. Rashida Tlaib called for a federal minimum wage of up to $20 an hour at a “One Fair Wage” event in Detroit on Sunday.

Tlaib and Michigan Democrat Debbie Dingell participated in an event called “Server for an Hour” to support the Raise the Wage Act that passed the Democrat-controlled House of Representatives Thursday.

Tlaib brought up the common counter-argument that raising the minimum wage will not actually feel like more money in the wallets of workers.

Fighting for our working families sometimes means walking in their shoes. It was only for an hour, but it was hard work. @HouseDemocrats passed #Fightfor15 #OneFairWage & now the Senate needs to.

Thank you to @onefairwage for inviting me into your movement. pic.twitter.com/POihHhC7kE

Politicians on the far left have called for a significant increase in the federal minimum wage for years. For example, presidential candidate and Independent Vermont Sen. Bernie Sanders supports a $15 an hour minimum wage yet has reportedly been locked in disputes with staff who say their annual salary does not measure up with his commitment.