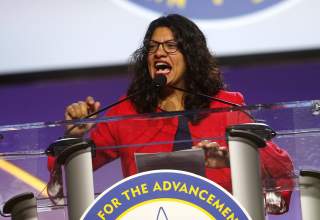 The Michigan congresswoman was speaking against a House resolution passed Wednesday that opposes the movement because it “does not favor a two-state solution and that seeks to exclude the State of Israel and the Israeli people from the economic, cultural, and academic life of the rest of the world,” the text of HR 246 states.

Tlaib started by saying she would not allow Congress to attack the right to “boycott the racist policies of the government and state of Israel.”

“The right to boycott is deeply rooted in the fabric of our country,” Tlaib said. “What was the Boston Tea Party but a boycott? Where would we be now without the boycott led by civil rights activists in the 1950s and ’60s, like the Montgomery bus boycott and the United Farm Workers grape boycott?”

She continued that some of the country’s “most important advances in racial equality and equity and workers’ rights” have been achieved through constitutional, collective action.

“Our right to free speech is being threatened with this resolution. It sets a dangerous precedent because it attempts to delegitimatize a certain people’s political speech and to send a message that our government can and will take action against speech it doesn’t like,” the Michigan congresswoman said.

The freshman congresswoman’s speech came around a week after a House resolution introduced by fellow freshman Democratic Minnesota Rep. Ilhan Omar that promotes BDS and other boycott movements.

“Americans of conscience have a proud history of participating in boycotts to advocate for human rights abroad, including … boycotting Nazi Germany from March 1933 to October 1941 in response to the dehumanization of the Jewish people in the lead-up to the Holocaust,” the H.R. 496 reads.

Tlaib’s office did not immediately respond to the Daily Caller News Foundation’s request for comment.