Report: America Needs a Massive Military Build-Up to Make Sure it Can Win a War Against Russia or China 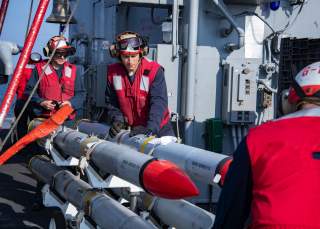 If there is one theme that is present in a new report on American defense, it is the word “more.”

And it needs to prepare to fight Russia, and China, while still maintaining its commitments in the Middle East.

Yet the commission questions whether the United States could even defeat Russia or China. “Because of our recent focus on counter-terrorism and counterinsurgency, and because our enemies have developed new ways of defeating U.S. forces, America is losing its advantage in key warfighting areas such as power projection, air and missile defense, cyber and space operations, anti-surface and anti-submarine warfare, long-range ground-based fires, and electronic warfare,” the commission warns. “Many of the skills necessary to plan for and conduct military operations against capable adversaries—especially China and Russia—have atrophied.”

In the commission’s view, the culprit is Congress’ 2013 Budget Control Act, which capped discretionary spending, including the defense budget (and which could be bypassed through mechanisms such as special funding for overseas military operations).

It’s hard to deny that after focusing for almost twenty years on chasing insurgents across Iraqi deserts and Afghan mountains, the U.S. military has forgotten much about battling Russian tanks and Chinese warships. But staggering is the breadth of the commission’s recommendations, which would not have been out of place at the height of the Cold War, especially the massive defense spending spree of the Reagan years.

As a bulwark against Russia, the United States should bring back a heavy mechanized division to Europe, plus increased electronic warfare, air defense, long-range fires, combat engineering, and command and control.

Meanwhile, the United States cannot scale down its commitments in the Middle East, according to the commission. In fact, it must be prepared to continue fighting ISIS and maybe Iran, all of which requires substantial special forces, airpower and intelligence assets, as well as advisory brigades to support local armies. And the United States must modernize its nuclear forces.

At this point arises the inevitable question: how much will this cost? “It is beyond the scope of our work to identify the exact dollar amount required to fully fund the military’s needs,” the report says. However, the commission recommends that the defense budget increase 3 to 5 percent each year, beyond inflation, for the next several years. That seems modest compared to the Reagan defense boom, which boosted defense spending by 50 percent between 1980 and 1985. But with the defense budget already around $700 billion, a 3 to 5 percent real increase would amount to tens of billions in additional funding.

Perhaps the most worrisome issue raised by the commission is what the United States would do with all those new weapons. The report recommends “that DOD more clearly answer the question of how it intends to accomplish a core theme of the NDS—defeating major-power rivals in competition and war. Without a credible approach to winning a war against China or Russia, DOD’s efforts will be for naught.”

Or put another way, what good are new weapons if there aren’t effective plans to use them?