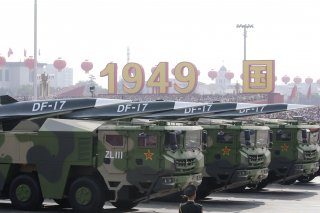 A new report has shed some new light on the hypersonic missile launched by China in July—claiming that it demonstrated a previously unheard-of technological advance. But it’s also raised some questions.

According to the Financial Times, the July test featured “a technological advance that enabled it to fire a missile as it approached its target traveling at least five times the speed of sound—a capability no country has previously demonstrated.”

The new report, citing “people familiar with details of the demonstration,” stated that DARPA experts “remain unsure how China overcame the constraints of physics by firing countermeasures from a vehicle travelling at hypersonic speeds.”

The War Zone, meanwhile, noticed something about the new Financial Times report.

“Adding to the overall confusion, the same FT article switches between references to a missile being launched, and delivery of unspecified countermeasures, before referencing unnamed experts who point to the use of these countermeasures as evidence of China’s supposed lead over Russia and the United States in terms of hypersonic weapons,” according to The War Zone

U.S. officials commented on the launch after it came to light in July.

“This development is concerning to us as it should be to all who seek peace and stability in the region and beyond,” a spokesperson for the National Security Council told the Financial Times. “This also builds on our concern about many military capabilities that the People’s Republic of China continues to pursue.”

“What I can tell you is that we watch closely China’s development of armaments and advanced capabilities and systems that will only increase tensions in the region,” Defense Secretary Lloyd Austin told reporters in October. “China is a challenge, and we’re going to remain focused on that.”

Also, this week, The Guardian reported that China had launched a second missile during the July test.

“Now, the test is believed to have also included the release of a separate missile that rocketed away, falling harmlessly into the South China Sea,” according to the Guardian. “Neither the United States nor Russia has demonstrated the same ability, which requires launching a missile from a parent vehicle traveling five times the speed of sound.”

The Financial Times had been the first news outlet to report on China’s launch, although the report was not available until October, several months later. The report stated that the missile had “circled the globe before speeding towards its target, demonstrating an advanced space capability that caught US intelligence by surprise.”

BBC reported, shortly after the release of the report that China had denied that the Financial Times story was accurate. A Chinese foreign ministry spokesman claimed the object was a spacecraft and not a missile.

The United States is among several countries known to be working on creating hypersonic missiles. The shortlist of great-power competitors includes Russia and China.