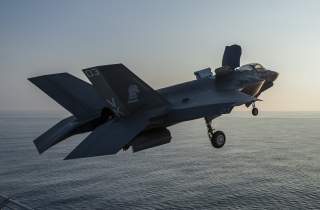 Is the Pentagon playing word games to make the F-35 program appear to be on track?

Major design flaws are being recategorized as less severe problems, despite the flaws not being fixed, says the non-partisan Project on Government Oversight, which obtained documents from the Department of Defense's F-35 Joint Program Office.

"A copy of the minutes from the F-35 Deficiency Review Board’s June 4, 2018 meeting, obtained by POGO, shows that the Board downgraded 19 serious (Category I) deficiencies to the less-serious Category II, including 10 with no plan in place to correct the known design flaws," wrote POGO defense analyst Dan Grazier. "In a few cases, the Board followed the recommendations of the testing engineers to downgrade flaws. For the rest of the 19, however, the minutes show that the Board acted on its own to change deficiency statuses, with no apparent justification or evidence that the flaws were in fact not as serious as initially categorized."

The problems that were downgraded from Category I to II include "inability to readback target coordinates from JDAM [Joint Direct Attack Munition] weapons." In other words, an F-35 pilot currently can't confirm target coordinates before launching a weapon that could kill friendly troops or civilians. "The pilots can see what information they send to the weapon, but not what coordinates have actually been stored in the weapon," Grazier notes.

Other downgrades include warning indicators for weapons release, damage from the arresting hook and incorrect fuel indications. In addition, the Identification Friend or Foe (IFF) transponder is not automatically broadcasting when a pilot ejects.

"Were a pilot to eject without first manually switching the transponder to transmit the emergency signal -- and an ejecting pilot will often have little time or presence of mind to do so -- hours could pass before anyone knows they have had a problem, let alone that they ejected and crashed," Grazier explains.

These are more than a bucket list of teething troubles for a new aircraft. Category I deficiencies are major flaws that could result in loss of the aircraft or crippling of combat capabilities. Category II problems could impair mission success. As of January 2018, the F-35 had 111 Category I and 855 Category II deficiencies, according to the Government Accountability Office.

The Pentagon has a big incentive to minimize the F-35's flaws. The decision on whether to start full-rate production -- that will procure 77 or more F-35s per year  -- is almost here. Full production can't begin until the F-35 passes its combat testing phase of development, so the more problems that can be minimized, the easier it will to give the F-35 the green light.

Any modern combat jet will have numerous bugs when it is fielded. But the F-35 is unusual in that the military is buying aircraft before development is complete, similar to buying a car while General Motors is still finishing the design. "Besides showing just how complex and incomplete the F-35’s development really is, 17 years in, the large number of deficiencies reported proves that many people have been conscientiously working toward improving the final engineering design to ensure it is safe and effective," Grazier writes. "With the revelation that officials made paperwork fixes to make these serious deficiencies appear acceptable, it seems that much of that work is being ignored in the name of political expediency and protecting F-35 funding."