Report: This Is How Climate Change Will Affect Your Health 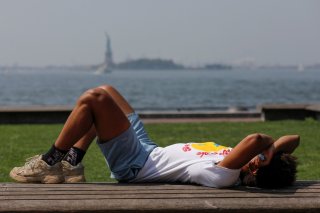 A top medical journal has sounded the alarm this week that climate change is set to become the “defining narrative of human health.”

According to the Lancet in its annual Countdown on Health and Climate Change, climate change will eventually trigger massive food shortages, deadly disasters, and disease outbreaks that could potentially dwarf the death toll of the ongoing coronavirus pandemic.

The report added that trillions of dollars are being spent globally to help economies recover from the pandemic, but less than twenty percent of that money is going toward reducing climate-warming greenhouse gas emissions.

“We are recovering from a health crisis in a way that’s putting our health at risk,” Marina Romanello, the lead author of the report, told National Public Radio.

The Lancet noted that greenhouse gas (GHG) emissions, which are “driven to a large extent by the burning of fossil fuels (e.g., coal, oil, and natural gas), have already warmed the world by two degrees Fahrenheit on average, compared to pre-industrial temperatures. The long-predicted consequences of climate change are unfolding, and an urgent reduction in GHG emissions is required to try to avoid reaching 2.7 degrees Fahrenheit within the next two decades.”

The report goes on to warn that “there is no safe global temperature rise from a health perspective, and additional warming will affect every U.S. region. Today’s adverse health impacts of climate change are varied and widespread. All of us have been or likely will be affected by climate change, with some hazards more easily recognizable than others. Climate change is worsening heatwaves, amplifying droughts, intensifying wildfires, supercharging hurricanes, and fueling flood risk through increased heavy rainfall events and rising sea levels.”

The economic costs associated with climate change have surged significantly in recent years. “In 2020, a record-breaking 22 weather and climate disasters each caused over $1 billion in damage (e.g., structural, crop) in the U.S. with over $95 billion dollars in total losses. A record 11 hurricanes made landfall—seven as billion-dollar events,” it continued.

In addition, climate change can also be responsible for health effects that are less obvious.

“For example, climate change increases pollen levels that worsen allergic and respiratory conditions, and climate-driven increases in temperature and precipitation make it easier to spread waterborne diseases that cause gastrointestinal illness,” the report states.

Furthermore, potentially deadly health risks related to extreme heat are growing quickly. For example, earlier this summer, hundreds of people died as a result of a record-breaking heatwave in the Pacific Northwest.

“The risks of short- and long-term exposure to extreme heat are among the best-studied aspects of climate change. Emerging research has linked heat exposure to poor sleep quality, worse mental health, higher suicide rates, and increased crime rates—in addition to the multiple other threats it poses to health,” the report writes.

“More than a third of urban heat-related deaths in the 1990s and early 2000s can be attributed to climate change, and climate change has further increased the frequency, duration, and intensity of heatwaves since that time—putting more people at risk,” it concludes.