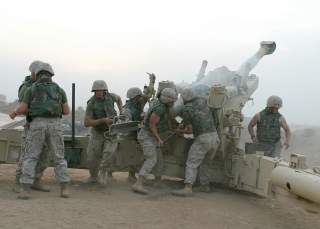 Iran is responsible for the deaths of more than 600 U.S. service members in Iraq from 2003 until 2011, according to a Pentagon report provided to the State Department.

The Pentagon's latest figures are higher than earlier estimates, which put the number of U.S. troops killed by Iranian proxies and weapons at roughly 500.

U.S. Special Representative for Iran Brian Hook told reporters on Tuesday that the higher figure was based on "declassified U.S. military reports."

The revised death toll means that Iran is responsible for 17 percent of all U.S. troops killed between 2003 and 2011, Hook claimed.

Of the weapons that Iran is accused of providing Shiite militias and other groups in Iraq, the most deadly were explosively formed penetrators. This type of improvised explosive device fires a slug of high density metal at an extremely high velocity, giving the projectile enough energy to pierce any U.S. track or wheeled vehicle.

U.S. troops were attacked by EFPs most often in parts of Iraq that were predominately Shiite, such as Sadr City.

Under then President George W. Bush, U.S. government officials provided pictures showing that EFPs being used in Iraq had been built in Iran, but they were unable to prove that Iran had given the weapons to proxy forces fighting U.S. troops.