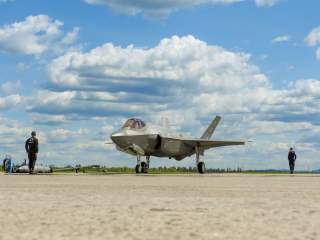 As a result of this move by RuASF, the IAF was unable to complete their second round of strikes, the Russian aviation website Avia.Pro added.

In the night of Saturday, Aug. 24, 2019 the Israeli Air Force (IAF) carried out an airstrike over the southwestern region of Syria.

According to Al Masdar News, the strike resulted in the destruction of an alleged Hezbollah compound that was located in the Aqraba region of the Damascus Governorate.

According to a Syrian Arab Army (SAA) source, at least five Hezbollah military personnel were killed as a result of this Israeli attack.

While IAF managed to hit one of its main targets, the Russian publication Tsargrad.TV reported that IAF aircraft were forced out of Syrian airspace as they were preparing for a second wave of strikes.

According Tsargrad.TV, in fact Russian Air and Space Force (RuASF) Su-35s took off from Hmeimim Airbase and made their way towards the Mediterranean Sea as the Israeli Air Force aircraft were preparing a second attack.

As a result of this move by RuASF, the IAF was unable to complete their second round of strikes, the Russian aviation website Avia.Pro added.

It is worth noting that one day before these strikes, Israeli Prime Minister Benjamin Netanyahu held talks with Russian President Vladimir Putin.

Since this attack on Saturday evening, tensions between Israel and Iran have been at a month-long-high, as Lebanon’s Hezbollah has vowed to avenge their losses from the Israeli strikes.