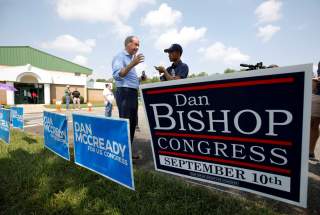 Rep.-elect Dan Bishop of North Carolina raised a fraction of what his Democratic opponent received in the lead-up to Tuesday’s special election, but large sums of outside spending helped push the Republican over the edge to victory.

The race for North Carolina’s 9th Congressional District, which was described as a potential 2020 bellwether, was flooded with nearly $11 million in outside spending that favored Bishop by a factor of 2-to-1, The Charlotte Observer reported.

Bishop defeated McCready with 50.7% of the vote compared with the Democrat’s 48.7%.

“What this amount of money indicates is how much both parties are willing to truly invest in elections that may not have a governing consequence but have more strategy and symbolism,” political scientist Michael Bitzer said, according to the Observer.

The RNC has no debt and a war chest of $46.6 million as of the end of July, the latest available records with the FEC, dwarfing the DNC’s cash reserves of $9 million and $5.6 million in debts.

Other major outside spenders in the race were the House Republican-tied Congressional Leadership Fund and Club for Growth Action, “super” political action committees that spent $2.3 million and $1 million, respectively, attacking McCready.

Bishop was the beneficiary of $6.8 million in outside spending while McCready benefitted from $3.9 million, the Observer reported.

But perhaps most critical to Bishop’s victory was his election-eve rally with President Donald Trump.

Beautiful evening in Fayetteville tonight! Big day in North Carolina tomorrow. Make sure you get out and VOTE for Dan Bishop in #NC09 and Greg Murphy in #NC03! pic.twitter.com/bu296fHQab

“We fell an inch short tonight, but it took more than $6 million in outside Republican spending and a last-minute Trump rally,” Bustos said in a statement.

The large sums of outside money made the race one of the most expensive congressional special elections in U.S. history, coming second only to the $27 million spent in 2017’s special election in Georgia that resulted in a victory for Republican Karen Handel over Democrat Jon Ossoff.