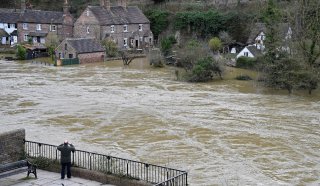 The global rise in sea levels will likely meet and surpass all previous scientific estimates, according to a new study from the University of Copenhagen’s Niels Bohr Institute.

The research, which was published in the European Geosciences Union journal Ocean Science, further revealed that, under the research team’s worst-case scenario, sea levels could surge as much as four and a half feet by the year 2100.

In its most recent assessment, the Intergovernmental Panel on Climate Change (IPCC) had announced that sea levels were unlikely to rise beyond 3.6 feet by 2100.

The study’s authors noted that predictions used by the IPCC are based on a “jigsaw puzzle” of models for ice sheets, glaciers, and the warming of the sea. Such predictions can suffer because only a limited amount of data is sometimes available for the models to be tested on.

“We have better historical data for the sea level rise in total, which, in principle, allows for a test of the combined puzzle of models. However, it has not been part of the routine to make sea level hindcasts at IPCC, so presently we are not able to tell if these models are capable of reproducing the historical sea level,” Aslak Grinsted, associate professor at the Niels Bohr Institute, said in a statement.

“At the Niels Bohr Institute, we have used this situation as our starting point, and so we observe how sensitive the models are in reacting to warming. We expect that if we compare observational data from the fairly short period of time from 1850 onwards with the sensitivity of the models, it should allow us to assess whether the models are realistic or not.”

The research team is hoping its method for validating future scenarios by looking into the past will be more widely used to gauge sea level rise in the future.

“Apparently, the models we are basing our predictions of sea level rise on presently are not sensitive enough. To put it plainly, they don’t hit the mark when we compare them to the rate of sea level rise we see when comparing future scenarios with observations going back in time,” Grinsted said.

In another study published in the journal Nature, scientists have concluded that the rate of ice loss of Greenland’s ice sheet within this century will likely outpace any other hundred-year period since the end of the last ice age, giving even more momentum to sea level rise globally.

Over the last two decades, Greenland’s massive ice sheet has melted at a rate of roughly six billion tons per century, a troubling figure that is only approached by a warmer period that occurred between seven thousand and ten thousand years ago. At current rates, the ice sheet could shed 8.8 billion tons of ice until the turn of the century. In a worst-case scenario, the ice loss could reach a staggering thirty-six billion tons.

Previously, it was discovered that a total of twenty-eight trillion tons of ice have disappeared from the surface of the Earth since 1994, according to UK scientists who analyzed satellite surveys of the planet’s poles, mountains, and glaciers.