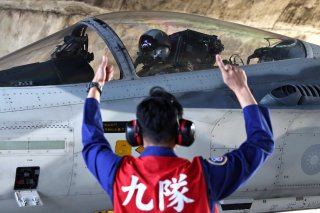 These actions have compelled Taiwan’s air force to respond, which have strained aging airframes and highlighted vulnerabilities in the supply of critical spare parts for its fighter jets. The Ministry of National Defense said in March it would no longer scramble in response to every incursion, reserving interceptions for only more serious encounters.

While Beijing’s actions do not violate international law—given that ADIZ boundaries don’t equate to sovereign air space or territorial waters—they hold political and strategic significance. And while overflights have not led to conflict, aside from choice words hurtled from opposing pilots, they heighten chances of accidents and miscalculation. They cannot be allowed to become the norm and must be stopped.

Military overflights into ADIZs in East Asia are not uncommon, given competing and overlapping claims in the region. Over half of China’s East China Sea ADIZ, declared in 2013, overlays on top of Japan’s existing ADIZ; smaller parts also conflict with Taiwan and South Korea’s boundaries. Further north, frequent clashes have also occurred between South Korea and Russia, with the latter unwilling to recognize the former’s ADIZ claims.

The difference between these incidents and China’s overflights into Taiwan’s ADIZ is that Beijing has made clear its actions are intended to send a political message. Following the large-scale operations last Tuesday, China’s cabinet-level Taiwan Affairs Office (TAO) called it a “strong response towards acts of collusion” by foreign powers over Taiwan. It said it would not “tolerate attempts to seek independence or wanton intervention in the Taiwan issue by foreign forces.”

After an earlier exercise in January this year, the TAO also said they were “a warning” for “external forces intending to interfere in China’s affairs.” Analysts have interpreted Chinese exercises—which coalesce around improvements in relations between Taiwan and the United States—as attempts to force both sides to reassess the cost of such advances.

Beijing’s actions also have military implications, which should concern other stakeholders in the region. An analysis of public data released by the Ministry of National Defense shows most Chinese overflights involve just a few planes at a time, primarily consisting of anti-submarine warfare, reconnaissance, and airborne warning systems. These aircraft add to the PLA’s situational awareness of the region, including on Taiwan and partner country ship movements.

On April 8, both PLA air and naval assets conducted simultaneous military exercises to the west and east of Taiwan, including maneuvers from China’s sole operating aircraft carrier, Liaoning. Such operations could aid in the PLA’s tactical training if a contingency scenario were to break out. China’s military said in a statement that the exercises “beef up” its capability to “safeguard national sovereignty, security and development interests.”

There is also concern that by regularizing such engagements, China is creating a “new normal” in the region; a baseline where heightened military tensions become gradually accepted, not only by Taiwan, but also by the international community. By drawing the boundaries closer and closer to the propensity of military conflict, China may find it easier to suddenly turn up the operational tempo, catching Taiwan’s defense by surprise.

It is incumbent on both Taiwanese society and the international community to react forcefully to such behavior. There should be a common understanding that China should not be utilizing the specter of military pressure to achieve set policy outcomes.

In a sign that Taiwan’s security transcends political interests, both major political parties in Taipei have denounced Beijing’s overflights into Taiwan’s ADIZ. President Tsai Ing-wen has called Chinese military activities in Taiwan’s vicinity a threat to “regional peace and stability.” The Kuomintang also characterized the actions as “intensive harassment,” adding that the PLA needed to “exercise restraint” and resolve issues peacefully.

The Biden administration has taken a hard line against such provocations. Three days after it took office, the State Department released a statement urging Beijing to cease military, diplomatic, and economic pressure against Taiwan. It has continued to send warships to transit the Taiwan Strait with regularity—the latest being on June 22—demonstrating U.S. resolve to peace and stability in the region.

Other like-minded partners have followed suit. Japanese Defense Minister Kishi Nobuo has said that “the peace and stability of Taiwan are directly connected to Japan,” while the Japanese government has said it would work with the United States to preserve peace in the Taiwan Strait. Similar sentiments have been expressed by the G7, Australia, South Korea, and other democratic partners.

These statements should be backed up by actions. Within Taiwan, there should be an aggressive campaign to enhance the Taiwanese air force’s readiness, including by addressing spare parts shortages, pilot fatigue issues, and ensuring that modernization programs proceed without delay. Trends of PLA intimidation should be identified to preposition personnel and equipment in ways that reduce any impact on overall readiness.

Taiwan’s military should also continue to seek smart and effective ways of deterrence, with the sustained understanding that it would not be effective or wise to intercept every single PLA aircraft coming into Taiwan’s ADIZ. This would potentially include looking into the use of drones or other new technologies to signal deterrence, maintaining the security of Taiwan’s surrounding air space.

Meanwhile, the international community should see Beijing’s actions for what they are: threats to the lives of Taiwan’s 23 million citizens, which can have no place in rational discourse.

Sustained international pressure should be brought to bear on the overflight issue, with each escalation deserving of greater attention and scrutiny. Countries around the world should call on Beijing, both privately and publicly, to not cross the median line of the Taiwan Strait—an implicit cross-strait understanding that has been respected in years past. It should be made clear that such provocations risk jeopardizing the cross-strait status quo, which all parties have a responsibility to uphold.

And lastly, countries should continue to follow examples set by the United States, Canada, United Kingdom, and France by sending their warships to transit across the Taiwan Strait. More than symbolic gestures, such deployments are evidence that the international community has a stake in the peace and stability of the region, deterring potential military adventurism from taking place across the Strait.

Vincent Chao was recently the Director of the Political Division at the Taipei Economic and Cultural Representative Office.

Eric Huang is a non-resident fellow at the National Policy Foundation and a professional lecturer of International Affairs Tamkang University.