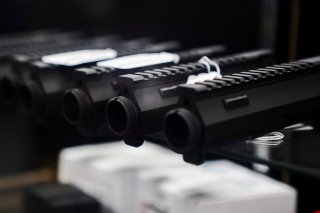 The nation's capital has some of the strictest gun laws anywhere in the country. And this week it was reported that Washington, D.C. hit a grim milestone—it reached its 200th homicide of the year. Homicide rates have not been so high since 2004, and there is still nearly a month and a half left in the year, although that number includes all homicides, not just those involving firearms. Police officers in DC have reportedly taken more than two-thousand illegal guns off the streets, a number that exceeds the record high from last year.

Clearly, criminals are ignoring the district's bans on firearms, and now efforts are underway to combat the threat of so-called "ghost guns,"  firearms made from kits including an unfinished receiver. The district has banned such parts, but criminals have largely ignored such bans.

"This is something that we should really, really, really continue to be concerned about," Police Chief Robert Contee told the local NBC affiliate. He also suggested that the ghost guns, which lack serial numbers, are somehow more dangerous because the parts can't be easily traced.

The number of such firearms has risen considerably in recent years. In 2018, just twenty-five of the homemade firearms were recovered by the DC police, and the number jumped to 116 a year later, while 282 were recovered in 2020. This year, there have been 313 such ghost guns recovered in the district.

"It's something we've been working on our laws to help make them tighter and to really make sure that we crack down on that," said DC Councilman Charles Allen, who chairs the council's public safety committee. "We've given the attorney general more authority that he's now exercising to go after these people who try to sell these kits online."

This week Chief Robert Contee, who was joined by Washington Mayor Muriel Bowser and officials from the Bureau of Alcohol, Tobacco and Firearms (ATF), announced a program where tipsters can receive up to $2,500 for information that leads to an arrest and seizure of an illegal gun. Additionally, individuals can receive up to $5,000 from the ATF if the weapon is a "ghost gun" or is a handgun equipped with an illegal conversion device.

"We're literally throwing every resource at this issue at our disposal," Bowser told reporters.

The police chief also stressed the process to receive the money would be expedited with no conviction of the case required.

"Citizens will not have to testify in court," Contee said. "Everything remains anonymous. A person calls in a tip, that tip leads to an arrest, the citizen who calls that tip in gets a number and once an arrest is made, that person gets paid."

To date there have been more than 280 arrests tied to ghost guns in the city, and nearly 100 of those have been teenagers.