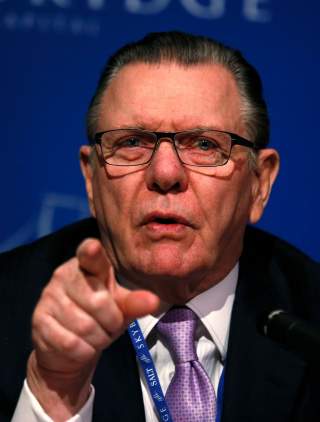 Despite overtures from the Taliban and declining interest among Americans, it is essential that the United States remain in Afghanistan, retired Army Gen. Jack Keane said this week at a Heritage Foundation event.

Over the past 18 years, Keane said, the U.S. has made tremendous progress at preventing another attack on the U.S. from al-Qaeda originating from Afghanistan. But military withdrawal now, he said, would have extremely negative consequences.

Keane also said his politically astute sources in Afghanistan say the Taliban, the fundamentalist Islamic military organization that used to control the country, wouldn’t win a single district in the event of an election.

The U.S. first took military action in Afghanistan in response to the attacks of 9/11, when Keane became the first senior military leader to go after the Taliban, which had been in power since 1996 and provided a haven to Osama bin Laden’s al-Qaeda terror network.

In the event Tuesday at Heritage, “Making the Case for America’s Mission in Afghanistan,” Keane detailed military successes and his recommendations for the future.

Although Taliban leaders say they want to negotiate, the threat that  terrorist groups al-Qaeda and the Islamic State, or ISIS, would use the nation as a safe space to grow is too great to trust negotiations, he said.

Keane, a former vice chief of staff for the Army, is currently chairman of the Institute for the Study of War and  a member of the Commission on the National Defense Strategy.

Keane said he spoke a few weeks ago with Afghan President Ashraf Ghani, who took office in September 2014 and argues that his government is different from past administrations.

But past Afghan administrations have lied to the U.S. with similar claims before, Keane said.

Neighboring Pakistan’s government has supported the Taliban by arming and harboring troops, in addition to protecting fertilizer factories that made 85% of the improvised explosive devices that have killed Afghans as well as U.S. troops, he said.

The Taliban’s top priority, Keane said, is to get the United States to sign an agreement to completely withdraw troops from Afghanistan, and it will say anything to achieve that, including promises of a cease-fire.

He said the Taliban’s leaders calculate that a withdrawal of U.S. troops would produce a massive boost to their movement, as it would amount to a U.S. admission of defeat and guarantees the legitimacy of the Islamic Emirates, which is the Taliban political movement in Afghanistan.

Keane said the Taliban leadership also believes that if the U.S. signs a withdrawal agreement, it would tip the political and military balance in favor of the Taliban to eventually overthrow the Afghan government.

The Taliban doesn’t want democracy, Keane said, because 85% of the government rejects the organization, making it the most unpopular insurgency of modern times.

America’s primary mission in Afghanistan was to prevent another attack on the U.S. launched from there, he said, and that has been accomplished.

Now isn’t the time to give up that position in favor of trusting the Taliban, he said.

The mission in Afghanistan was on track with the surge of U.S. troops in 2008, Keane said, but President Barack Obama “doomed us” when he changed the strategy upon taking office in January 2009.

Fortunately, Keane said, President Donald Trump understands the need for a strong military presence in Afghanistan. Trump, however, is considering reducing the number of U.S. troops there.

Negotiations with the Taliban for a peace settlement seem unlikely, Keane said, but would require strong conditions such as a cease-fire, a minimum of 8,600 American troops in Afghanistan, and dramatic changes in political and on-ground conditions.

This article by Allison Schuster originally appeared in The Daily Signal. It was originally published in January 2020.