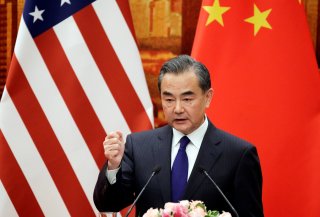 House Speaker Nancy Pelosi on Tuesday landed in Taiwan, in a controversial move amidst her tour of Asia. The visit, during which the speaker is scheduled to meet with  President Tsai Ing-wen and legislators, has drawn the ire of China. The speaker will also, per NPR, receive an award from the Taiwanese president.

"The U.S. & Taiwan have made provocations together first, whereas China has been compelled to act in self-defense,” a foreign ministry spokesperson said on Twitter ahead of the planned visit.

Chinese state media went even further, with Hu Xijin of the Global Times tweeting that China had the right to "forcibly dispel Pelosi's plane" and "if ineffective, then shoot them down.” (The tweet was removed for violating Twitter’s rules.)

According to Taiwan News, the blacklist affects more than 2,000 products from about 100 exporters.

Pelosi defended the visit in a Washington Post op-ed published concurrently with her arrival.

“We must stand by Taiwan, which is an island of resilience,” the speaker wrote. “Taiwan is a leader in governance: currently, in addressing the covid-19 pandemic and championing environmental conservation and climate action. It is a leader in peace, security, and economic dynamism: with an entrepreneurial spirit, culture of innovation, and technological prowess that are envies of the world.”

She added that her visit does not contradict the longstanding “One-China” policy. She also compared the situation to Russia and Ukraine, having recently visited Kyiv.

“Indeed, we take this trip at a time when the world faces a choice between autocracy and democracy. As Russia wages its premeditated, illegal war against Ukraine, killing thousands of innocents — even children — it is essential that America and our allies make clear that we never give in to autocrats.”

According to Axios, the White House had warned against Pelosi visiting. Also, President Xi Jinping had warned President Biden that “Those who play with fire will perish by it.”

House Speaker Newt Gingrich visited Taiwan in the 1990s, but Pelosi is the highest-ranking U.S. official to set foot in the territory since.