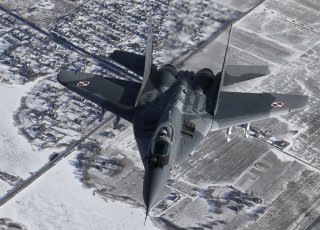 Retired U.S. Air Force Lt. Gen. David Deptula said he is puzzled by Russia’s inability to establish air superiority over Ukraine. He also believes the United States should assist in the transfer of Polish MiG-29s to Ukraine.

“Their (Russia) failure to achieve air superiority is really puzzling,” Deptula told The National Interest in an interview. “Control of the air is a prerequisite to both freedom to attack and to be free from attack. This is why the transfer of the twenty-eight Polish MiG-29s into Ukraine is so important. And it should have happened already, quite frankly, without all the fanfare going on in the media. It should have been done quietly, with Ukrainian pilots taking the train to Poland, flying the jets back to Ukraine and getting them into the fight.”

The Department of Defense has declined a Polish proposal to hand its MiG-29s over to the United States to allow them to be sent to Ukraine. The United States believes that doing so would be viewed as an escalation and could spark a wider conflict.

“The Ukrainians need them for the sustainment of their air force, because when you use fighter aircraft in combat and fly them often and hard, they tend to break,” Deptula said. “So the additional MiG-29s would help sustain Ukrainian defense against Russian aggression.”

Deptula said he believes Polish planes could make a huge difference when it comes to current Ukrainian efforts to challenge Russia in the air and deny the invading force an opportunity to achieve air superiority. If done quietly, Deptula said the jets could have their intended effect without generating a broader conflict between Russia and NATO.

“Once they were there, no one could know or tell which aircraft came from Poland. This isn’t rocket science,” Deptula said. “Now, the claim that the fighter aircraft transfer was not likely going to change the effectiveness of the Ukrainian Air Force against the Russians is simply not accurate. I”m still hopeful that there will be an opportunity to shift those aircraft.”

Deptula compared the situation to the United States’ decision to provide assistance to Great Britain in 1940 despite a series of neutrality acts passed by Congress in the 1930s.

“Because of the neutrality laws, the United States refused to directly deliver armaments to Britain at the beginning of the war… then Winston Churchill called President Roosevelt and he begged for the delivery of the aircraft,” Deptula said. “In response, the U.S. was able to get the aircraft to England by moving the aircraft North to the Canadian border, where Britain took delivery of them and literally pulled them into Canada with horses and trucks. The Poles could fly their MiG 29s to roads next to Ukraine and the Ukrainians could fly them over the border. So there is an option, but it needs to be done quietly.”

Deptula said that the Russians already object to lethal military assistance being provided to Ukraine, and said that aircraft would not be different.

“NATO right now is giving Ukraine rifles and missiles,” he said. “It’s time to give aircraft that can help them immediately and be put to use defending their people.  If we transfer a pocket knife to Ukraine, Putin is going to object. A weapons system is a weapon system.”

Kris Osborn is the Defense Editor for the National Interest. Osborn previously served at the Pentagon as a Highly Qualified Expert with the Office of the Assistant Secretary of the Army—Acquisition, Logistics & Technology. Osborn has also worked as an anchor and on-air military specialist at national TV networks. He has appeared as a guest military expert on Fox News, MSNBC, The Military Channel, and The History Channel. He also has a Master's Degree in Comparative Literature from Columbia University