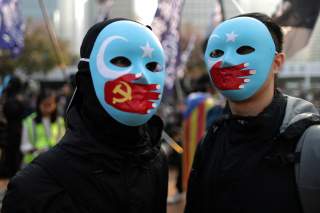 The Chinese government imprisoned Muslims for basic religious activity, such as going to a mosque, praying or having a long beard, a database obtained by The Associated Press shows.

The newly released database shows that the Chinese government targeted Muslims based both on their religious beliefs and on their ties to family members, according to the AP.

The database offers the most complete view yet as to how and why Chinese officials chose to detain people and imprison them in detention camps, examining the internment of 311 people who have relatives abroad and listing information on over 2,000 of their family, friends and relatives.

The data show that the Chinese government targeted individuals based on activities such as praying or going to mosque or even growing a beard. People with relatives who are already detained are much more likely to be detained themselves, the database also shows.

Every entry includes the prisoner’s address, name, detention date, detention location and national identity number. The entries also include detailed information on the prisoner’s family, religious background, the reason this person was detained, and the decision made whether or not tot release the prisoner, the AP reported.

The publication reported that it is unclear which department of the Chinese government compiled the documents or who the documents were compiled for.

“It’s very clear that religious practice is being targeted,” University of Colorado researcher Darren Byler, who studies the use of surveillance technology in China’s Xinjiang region, told the AP. “They want to fragment society, to pull the families apart and make them much more vulnerable to retraining and reeducation.”

Information obtained from the database comes after leaked internal files from the Chinese government in November 2019 showed how top officials’ demands led to the creation of mass indoctrination camps of groups like Uighurs and Kazakhs.

The documents showed that the Chinese government is aware the camps, which the government portrays as job-training efforts to quiet extremism, have torn parents away from their children, leaving students unsure of who will pay their tuition. The papers also show that officials were told to tell the people who if they complained, their families might suffer further.