Revealed: The Pentagon’s Pacific Plans for the B-21 Stealth Bomber 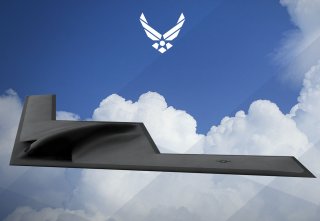 The Pentagon plans to deploy its emerging B-21 stealth bomber in the Pacific as part of a decided effort to ensure technical superiority, sustain deterrence, and, if needed, hold potential adversaries at risk.

The plan, articulated by Acting Assistant Secretary of Defense for Indo-Pacific Security Affairs David Helvey, incorporates the integration of surveillance assets, submarines and what the Pentagon envisions as a new generation of stealth technology contained in the B-21.

“We're making investments to ensure that we maintain operational readiness and strengthen the conventional capabilities that we have that are our enduring advantage such as submarines, the new B-21 Stealth bomber, the P-8 aircraft,” Helvey told reporters June 18, according to a Pentagon transcript.

Helvey discussed the anticipated operation of the B-21 in the context of increased U.S.-allied training operations, coordinated strategic policies and a specific focus upon the “deterrence of any actors that would look to undermine or threaten our shared interests,” as he put it.

Operating a B-21 in the Pacific, conducting patrols such as those now increasingly being performed by B-2s, B-52s and B1-bs in the Pacific theater, would present a new series of interwoven complexities for potential adversaries.

Given that the B-21 is largely a “black” program, very few details are known about its technical characteristics, however, developers have emphasized that it incorporates a new generation of stealth technology, bringing an ability to hold “any target, anywhere in the world . . . at risk.”

Slated to be operational in just the next few years, the B-21 could not come at a better time, given the rapid advances known to be occurring with Chinese surface-to-air defenses. While Russian S-400s and emerging S-500s have long been believed to be among the most advanced and concerning, there is now growing consensus that China’s technological progress in this area is also quickly gaining ground.

The most cutting edge air defenses increasingly draw upon faster computer processing, digital networking between otherwise separate “nodes,” and multi-frequency radar technologies. A 2017 assessment in Deagle.com of the HQ-9 specifically cites that the Chinese air defenses are in part based upon the U.S. Patriot and Russian S-300 Systems. The newer HQ-9B is cited to be able to hit ranges out to three hundred kilometers.

“The HQ-9 has a track-via-missile terminal guidance system and proximity fuze taken from the Patriot and ‘cold-launch’ and aerodynamics from tube-launched S-300 missiles,” the Deagle.com report states.

Despite the technological progress of air defenses, retired Lt. Gen. David Deptula, Dean of the Mitchell Institute for Aerospace Studies, maintains an “imperative for stealth,” explaining that the most advanced stealth bombers will remain very difficult to hit.

“Even if a radar can detect, it now has to track, and when it transfers that data to engage it will have to shoot a missile using much smaller radar than that used for detection. Also, fusing of the interceptor weapon can be affected by low observability technology,” Deptula previously told the National Interest. “Bi-static radar can help detect low observable aircraft. However, to intercept a stealth aircraft requires the transfer of detection from a large acquisition radar to a much smaller interceptor radar either on an aircraft or a missile that can track—or maintain continuous “lock-on” of the low observable aircraft

The B-21 image released by the USAF depicts a design that does not use vertical flight control surfaces like tails. Without vertical surfaces to reflect radar from side aspects, the new bomber will have an RCS (Radar Cross Section) that reduces returns not only from the front and rear but also from the sides, making detection from any angle a challenge, the Mitchell Institute writes.

Newer methods of infrared or thermal signature reduction are connected to engine and exhaust placement. Internally configured engines, coupled with exhaust pipes on the top of an aircraft can massively lower the heat emissions from an aircraft, such as the structure of the current B-2.

All of these emerging technical factors continue to inform a growing consensus regarding future war threats—that the B-21 may quite possibly be the only platform that will be able to penetrate certain enemy weapons and advanced air defenses for decades to come.