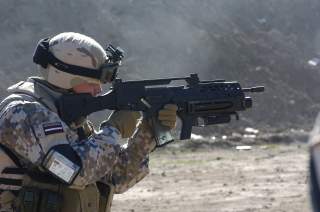 Key point: The G36 saga is a story in how weapons narrowly designed for one operating environment can develop glaring shortcomings when forced to perform in new ones.

The Heckler and Koch G36 rifle was a new rifle for a new Germany. Adopted after reunification united East and West Germany into a modern superstate, the G36 was a high tech marvel. After its baptism of fire, however, soldiers complained that the rifle was seriously flawed, and the German government decided to replace it. Was the G36 a wonder weapon for the infantry, failure, or something else?

During the Cold War Germany was split into two very different states. West Germany, part of the North Atlantic Treaty Organization and a key American ally, rebuilt quickly after World War II and enjoyed a vibrant economy. The German military, known as the Bundeswehr, adopted the Heckler and Koch G3 battle rifle as its main infantry weapon. The G3 was developed from the Spanish CETME rifle, which was in turn developed from the wartime German STuG 45 rifle. The full-sized 7.62-millimeter rifle was a stout, reliable design featuring a roller-locked, delayed blowback operating system, fully automatic fire, and a twenty round magazine.

East Germany, on the other hand, was a full member of the Warsaw Pact and one of the Soviet Union’s most reliable allies. The Nationale Volksarmee, as the East German army was known, was equipped with a close copy of the Soviet AKM, which it called the Maschinenpistole Kalashnikov or MPi-K. East Germany manufactured between 1.5 million and 2 million MPi-Ks, exporting a substantial number abroad.

In 1990, East and West Germany began the process of reunification. At the end of the Cold War Germany had been experimenting with a so-called “caseless” rifle, the Heckler and Koch G-11, a revolutionary design that promised a lightweight but deadly weapon that didn’t use conventional brass shell casings. The program collapsed but the G3, which had entered service in 1961, still required urgent replacement.

The G36 was chambered in 5.56-millimeter, bringing the Bundeswehr in line with other armies including the U.S., French, and British armies, taking a thirty round magazine. The weapon also featured carrying handle, a three power optic built into the carry handle, and a muzzle flash hider. The G36 was 39.29 inches long fully extended, weighed 7 pounds, 9 ounces, and fired 750 rounds per minute. An 18.89-inch barrel gave it a muzzle velocity of 2,788 feet per second at the muzzle. A shorter version, the G36K, is just 33.78 inches long, has a 12.6-inch barrel, and a prong-type flash hider.

The Bundeswehr purchased approximately 180,000 G36 rifles. The G36 was by all accounts an excellent peacetime weapon, gathering relatively few complaints. After 9/11, the German Army deployed for the first time outside Europe since World War II into an active combat zone. It was here during fighting in Afghanistan that the G36 proved problematic.

In April 2010, a German airborne platoon found itself in a nighttime firefight with Taliban forces. Three German soldiers were killed and the surviving paratroopers stated that their G36 rifles overheated during the battle. After overheating, the weapons were allegedly rendered inaccurate.

A German Army test of the weapon in 2015 confirmed the problems, stating that after just sixty rounds—or two magazines’ worth of ammunition—the rifle barrel would heat to the point it would warp the plastic barrel channel that held it in place. The warped channel exerted enough pressure on the rifle to shift the point of impact—where the bullet actually goes when it exits the barrel—to the point where the rifle could be up to 18 inches off target at 218 yards and 19.6 feet off target at 546 yards. That sort of accuracy is acceptable in a machine gun, where a certain amount of dispersion is required to perform a suppressive fire mission, but is unacceptable in a rifle.

Although rifle barrels are made of steel, barrels heated by shooting can lose accuracy, especially lightweight barrels. The tug of a rifleman’s sling on a rifle can take as much of an inch off accuracy at one hundred yards. A hot, thin barrel held in place by a crooked, warped plastic barrel channel can become permanently inaccurate. One solution is to “free float” the barrel--a rifle setup wherein the barrel only touches the rest of the rifle where it attaches to the upper receiver. This would have done away with the G36’s plastic barrel channel entirely. A free float barrel setup was at one point scheduled for the U.S. Army’s M4A1 carbine upgrade, but the service instead opted for a heavier barrel that resisted heating.

A German court ruled that Heckler and Koch was not liable for the G36’s problems, and that the real problem was the German Army’s specifications. The peacetime German Army, which in 1995 had only peacekeeping missions on the horizon, did not specify a weapon that could hold up to the rigors of sustained fire. In September 2015, German Defence Minister Ursula Von der Leyen announced the Bundeswehr would begin purchasing rifles of a new design in 2019. The competition has been narrowed down to two weapons, the Heckler & Koch HK433 and the Haenel MK 556.

All armies must balance what they think are normal conditions versus outlying conditions and buy their weapons accordingly. The G36 saga is a story in how weapons narrowly designed for one operating environment can develop glaring shortcomings when forced to perform in new ones. A heavier G36 rifle barrel would have resulted in a weapon better able to maintain accuracy in combat, but less comfortable to carry in peacetime or during peacekeeping duties. Had the G36’s service been limited to peacetime missions, the problem might never have been detected.