Revealed: This Is Why You'll Never See The Navy's Stealth Ships Coming 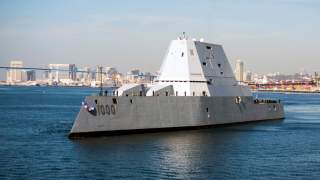 Key point: During an earlier phase of the Zumwalt’s development, news reports claimed the Zumwalt looked like a small fishing boat during radar testing.

Osborn previously served at the Pentagon as a Highly Qualified Expert with the Office of the Assistant Secretary of the Army - Acquisition, Logistics & Technology. Osborn has also worked as an anchor and on-air military specialist at national TV networks. He has a Masters in Comparative Literature from Columbia University. This first appeared last year.